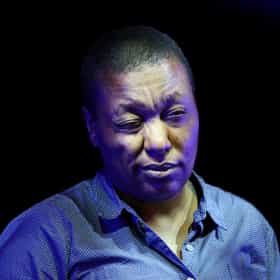 Michelle Lynn Johnson, better known as Meshell Ndegeocello (; born August 29, 1968), is an American singer-songwriter, rapper, and bassist. She has gone by the name Meshell Suhaila Bashir-Shakur which is used as a writing credit on some of her later work. Her music incorporates a wide variety of influences, including funk, soul, jazz, hip hop, reggae and rock. She has received significant critical acclaim throughout her career, and although she has never won a Grammy Award, she has been nominated ten times. She has been credited for helping to have "sparked the neo-soul movement." ... more on Wikipedia

Meshell Ndegeocello is ranked on...

#160 of 189 The All-Time Best Rock Bassists 207.3k VOTES The best rock bassists of all time are a varied bunch, and all the best bassists in rock are on this list. From the hard roc...
#29 of 144 People who voted for Meshell Ndegeocello... are 28x more likely to vote for Erykah Badu on this list are 39x more likely to vote for Jill Scott on this list The Best Neo Soul Artists 21.5k VOTES This neo soul artists list ranks the best neo soul singers and musicians by votes. This list of good neo soul groups and art...
#79 of 85 The Greatest Black Female Musicians 5.3k VOTES If you're an audiophile, chances are you own albums by many of the women on this list. These are the greatest black female m...
#87 of 129 The Greatest Black Female Singers 44.5k VOTES Making some of the best R&B songs of the past year, they've provided the soundtrack to your first dance, your birth...
#3 of 21 The Best Lesbian Rappers 7.9k VOTES Some of the greatest rappers and hip hop artists are women, and gay women at that. The best lesbian and bisexual rappers hav...
Singers & Musicians Who Are Bisexual 113.2k VIEWS Their voices inspire sing-alongs. Their beats fill dance floors. And their personal stories inspire. This list celebrates no...

Meshell Ndegeocello is also found on...