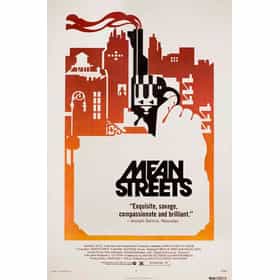 Mean Streets is a 1973 film directed by Martin Scorsese and co-written by Scorsese and Mardik Martin. The film stars Harvey Keitel and Robert De Niro. It was released by Warner Bros. on October 2, 1973. De Niro won the National Society of Film Critics award for Best Supporting Actor for his role as John "Johnny Boy" Civello. In 1997, Mean Streets was selected for preservation in the United States National Film Registry by the Library of Congress as being "culturally, historically, or aesthetically significant". ... more on Wikipedia

Mean Streets is ranked on...

Mean Streets is also found on...