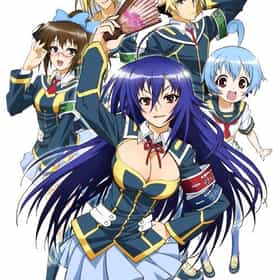 Medaka Box is a Japanese shōnen manga written by Nisio Isin and illustrated by Akira Akatsuki. The series follows the student council, originally Medaka Kurokami and Zenkichi Hitoyoshi, during their various adventures to honor suggestions, presented by academy members, in order to better the academy. Medaka Box was serialized in the Japanese magazine Weekly Shōnen Jump, published by Shueisha between May 2009 and April 2013. As of February 2013, Shueisha has compiled its chapters into 22 bound volumes. It was adapted into an anime television series that aired between April 5 and June 21, 2012. A second season aired between October 11 and December 27, 2012. ... more on Wikipedia

Medaka Box is ranked on...

#48 of 57 The Best Shonen Jump Anime of All Time 255.2k VOTES If you grew up reading manga, you probably have some copies of Shonen Jump laying around your house. That being said, what i...
#96 of 132 The Best Supernatural Anime 155.7k VOTES Do you have a taste for the supernatural when you watch anime? There's nothing wrong with that. In fact plenty of anime seri...
#5 of 15 The 15 Most Overpowered Anime Abilities 25.9k VOTES Think of your favorite anime ability. The best parts of anime action shows are the weirdly exaggerated anime abilities ...
#25 of 32 The Best Ecchi Romance Anime of All Time 20.5k VOTES Although most ecchi anime has some kind of romantic aspect to it, we wanted to rank the best ecchi romance anime of all ti...
#27 of 30 The Best Anime Like One Outs 652 VOTES Gambling, baseball, and mounds of excitement, One Outs is a thrilling series that combines each of these elements into a per...
#31 of 53 The Best Ecchi Manga of All Time 31.2k VOTES When it comes to manga, there's no doubt that the ecchi genre is extremely popular among readers. That being said, what is...
#11 of 13 The 13 Best Anime Like Freezing 411 VOTES If you’ve been enjoying Freezing, you probably want more right? From Highschool of the Dead to Valkyrie Drive, let's take a ...
#11 of 13 The 13 Best Anime Like Assassination Classroom 2.1k VOTES It's not easy finding another anime like Assassination Classroom. After all, how many shows out there star a giant squid cre...