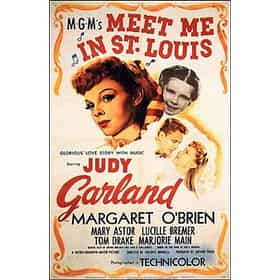 Meet Me in St. Louis is a 1944 musical film from Metro-Goldwyn-Mayer which tells the story of an American family living in St. Louis at the time of the Louisiana Purchase Exposition World's Fair in 1904. The picture stars Judy Garland, Margaret O'Brien, Mary Astor, Lucille Bremer, Tom Drake, Leon Ames, Marjorie Main, June Lockhart, and Joan Carroll. The movie was adapted by Irving Brecher and Fred F. Finklehoffe from a series of short stories by Sally Benson, originally published in The New Yorker magazine under the title "5135 Kensington", and later in novel form as Meet Me in St. Louis. The film was directed by Vincente Minnelli, who met Garland on the set and later married ... more on Wikipedia

Meet Me in St. Louis is also found on...