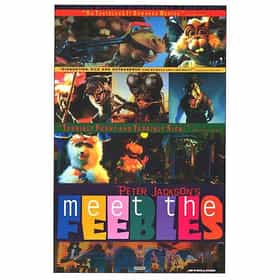 Meet the Feebles is a 1989 New Zealand musical black comedy film directed by Peter Jackson, and written by Jackson, Fran Walsh, Stephen Sinclair, and Danny Mulheron. It features Jim Henson-esque puppets in a perverse comic satire. Like Henson's Muppets, the Feebles are animal-figured puppets who are members of a stage troupe. However, whereas Henson's Muppets characterize positivity, naïve folly, and innocence, the Feebles present negativity, vice, and other misanthropic characteristics. Apart, it could be argued, from Robert the hedgehog, who is portrayed as positive, innocent and naive. It is the first Jackson film that was co-written by his future wife Fran Walsh, who has gone ... more on Wikipedia

Meet the Feebles is ranked on...

#350 of 440 The Funniest '80s Movies 172.8k VOTES List of the funniest 80s movies. The best comedy films of the 1980s are listed here in order of greatness. Feel free to crea...
#86 of 110 The Best Movies of 1989 11.1k VOTES A list of the best movies of 1989, from light dramas like Field of Dreams to action movies like Batman.The '80s were a decad...
#80 of 140 The Most Awkward Movies to Watch with Your Parents 51.2k VOTES There are certain obvious types of movies you don't want to watch with your parents. There are times, however, when a seemin...
#119 of 202 The Best R-Rated Black Comedies 1.7k VOTES List of R-Rated black comedies, ranked from best to worst with movie trailers when available. This list takes the best R-Rat...
#12 of 19 The Best Movies Directed by Peter Jackson 984 VOTES List of all movies directed by Peter Jackson ranked from best to worst with photos. Films directed by Peter Jackson are list...

Meet the Feebles is also found on...