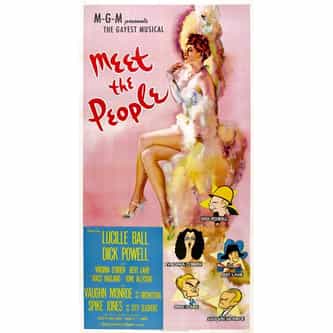 Meet the People is a Metro-Goldwyn-Mayer musical comedy film made during World War II, and starring Lucille Ball and Dick Powell and featuring Virginia O'Brien, Bert Lahr, Rags Ragland and June Allyson. The film takes its title from a successful Los Angeles stage revue, which ran on Broadway from December 25, 1940 to May 10, 1941. Vaughn Monroe and his orchestra, Spike Jones and his City Slickers, and Virginia O'Brien were also in the original stage cast. O'Brien sings the hit song ... more on Wikipedia

Meet the People IS LISTED ON