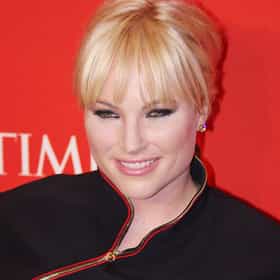 Meghan Marguerite McCain (born October 23, 1984) is an American columnist, author, co-host of The View, and an ABC News contributor.McCain is the daughter of 2008 presidential candidate and U.S. senator John McCain and Cindy McCain. McCain first received media attention of her own accord in 2007 for her blog, McCain Blogette, on which she documented life on the campaign trail and mused about fashion, music, and pop culture. In 2009 she became a contributing writer for The Daily Beast, and in 2011, began appearing as a contributor on MSNBC. In 2013, she began hosting on the start-up Pivot channel and, in 2014, assumed the co-host role on Pivot's TakePart Live until that show was ... more on Wikipedia

Meghan McCain is ranked on...

#53 of 61 The Most Influential Women Of 2018 62.9k VOTES The greatest women in history change the game in terms of the power and the presence women have in society. From inspiration...
#43 of 49 People who voted for Meghan McCain... People in the Northeast are 2x more likely to vote for this are 7x more likely to vote for Ron Nessen on this list The Best Code Names the Secret Service Has Ever Used 72.5k VOTES While Secret Service code names are a tradition that dates back all the way to the Wilson administration, it's a little know...
#205 of 524 Annoying Celebrities Who Should Just Go Away Already 1.2M VOTES The most annoying celebrities, ranked by entertainment fans themselves. These annoying celebs are obnoxious, overexposed, ...
#45 of 64 The Most Beautiful Full-Figured Women on Earth 333.3k VOTES After the age of thin models in the 1990's and an increase in "celebrity" and reality TV culture in the early 2000...
16 Scandalous Daughters of Politicians 1.7M VIEWS Because of the internet's existence, nobody is safe and nothing is sacred, so here are the 16 daughters of notable politicia...

Meghan McCain is also found on...