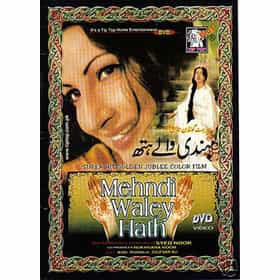 Mehndi Waley Hath Is a Punjabi Pakistani film directed by Syed Noor starring Saima and Babar Ali. Mehndi Waley Hath was Syed Noor's unofficial follow up to Choorian and subsequently expectations among the public as well as within the industry were sky high. There had been reports that Noor had been totally wrapped up in the shooting of what was being seen as his special pet project. All other productions he was involved in were receiving a cold shoulder while Noor worked painstakingly on Mehndi Waley Hath. Last summer when the preview trailers were screened they caused mini-hysteria in some centers in the Punjab where audiences demanded them to be replayed over and over! ... more on Wikipedia

Romance Movies and Films List of All Movies Released in 2000