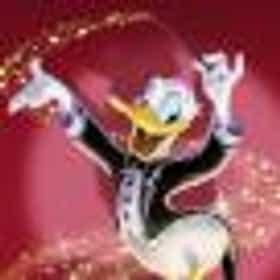 Melody Time, a 1948 film, is the 10th theatrically released animated feature produced by Walt Disney and released to theatres by RKO Radio Pictures on May 27, 1948. Made up of several sequences set to popular music and folk music, the film is, like Make Mine Music before it, the popular music version of Fantasia. Melody Time, while not meeting the artistic accomplishments of Fantasia, was mildly successful. It is the tenth animated feature in the Walt Disney Animated Classics series and the fifth package film following Saludos Amigos, The Three Caballeros, Make Mine Music, and Fun and Fancy Free. ... more on Wikipedia

Melody Time is ranked on...

#210 of 598 The Best Animated Films Ever 974.4k VOTES The best animated movies of all time are an assortment of animated movies that rank among the best movies ever made. Wh...
#152 of 373 The Best Musical Movies of All Time 169.8k VOTES The best musical movies of all time, ranked by fans and critics. This list include both the best original musical movies and...
#129 of 212 Musical Movies With the Best Songs 104.2k VOTES What are the greatest musical movies with the best songs? This list includes many of the greatest movies ever made, in large...
#105 of 257 The Best Movies for 10-Year-Old Kids 101.7k VOTES The films on this list of the best movies for 10 year olds have been ranked by the community as the best films for this age ...
#46 of 92 The Best Movies To Stream On Disney+ 1.5k VOTES If you're subscribing to the Disney+ streaming service and are trying to decide what to watch, you're in luck! We've co...
#57 of 58 The Best Disney Animated Movies 158.8k VOTES This list of Disney animated movies are classics that have been ranked and voted on by fans. Walt Disney Studios b...
#45 of 218 The Best G-Rated Family Movies 13.2k VOTES List of G-Rated family movies, ranked from best to worst with movie trailers when available. This list takes the best G-Rate...
#107 of 142 The Best Classic Fantasy Movies, Ranked 32k VOTES This list contains information on the best classic fantasy movies, ranked from best to worst by user votes. The best classic...
#85 of 213 The Best Walt Disney Company Movies List 18.8k VOTES Here are the best Walt Disney Company movies, ranked best to worst, including trailers, genres, and release dates....
#53 of 204 The Best Movies of 1948 3.6k VOTES List of the best movies of 1948, with movie trailers when available. Rock Hudson made his big screen debut in 1948 with the ...
#76 of 163 The Best Musical Movies Rated G 8.3k VOTES A list of the best G-Rated musical movies ever made, ranked by film fans' votes. This list is ordered by popularity, so only...

Melody Time is also found on...