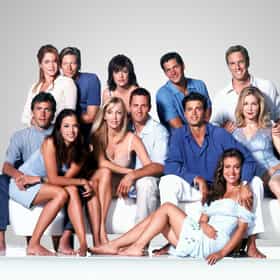 Melrose Place is an American primetime soap opera that aired on Fox from July 8, 1992 to May 24, 1999, for seven seasons. The show follows the lives of a group of young adults living in an apartment complex called Melrose Place, in Los Angeles, California. The show was created by Darren Star for Fox and executive produced by Aaron Spelling for his company, Spelling Television. It is the second series in the Beverly Hills, 90210 franchise. Season one and season two were broadcast on Wednesday at 9pm, after Beverly Hills, 90210. In 1994, for its third season premiere, the show moved to Monday at 8pm. The show had many cast changes during the run. Thomas Calabro was the only original cast ... more on Wikipedia

Melrose Place is ranked on...

#115 of 290 The Most Overrated TV Shows Of All Time 545.8k VOTES List of the most overrated TV shows of all time, ranked by fans, critics, and people like you. Ever since the dawn of the ...
#105 of 198 People who voted for Melrose Place... also upvote Friday the 13th Franchise on The Best '80s Horror Movies The Greatest TV Shows for Women 118.4k VOTES Behold, a complete list of the greatest TV shows for women, ranked by ladies who love to watch television! For stay-at-home ...
#6 of 94 The All-Time Best Primetime Soap Operas 8.7k VOTES Soap operas have been a staple of the television world since they first gained traction in the 1950s. However, it wasn’t unt...
#9 of 222 The Greatest Soap Operas of All Time 35.7k VOTES From daytime to primetime, soap operas have been a staple of television since Faraway Hill first aired in 1946. However, it ...
#35 of 36 The Worst TV Reboots 720 VOTES This list contains information about the worst TV reboots, ranked from the very worst to the just semi-terrible by your vote...
#12 of 51 The Best Aaron Spelling Shows and TV Series 1.5k VOTES Aaron Spelling shows list, ranked best to worst, including images of the shows when available. These TV series made by TV cr...
#16 of 23 The Best Spin-Offs of the '90s 1.8k VOTES What are the best 1990s spin-offs? Well, here are they are ranked from best to worst by user votes. Spin-offs of course mean...
#51 of 518 The Best Fox Broadcasting Company TV Shows 7.1k VOTES List of popular Fox Broadcasting Company shows, ranked from best to worst. This list of the top current and cancelled Fox Br...

Melrose Place is also found on...