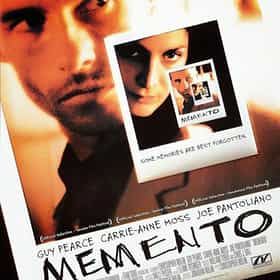 Memento is a 2000 American neo-noir psychological thriller film directed by Christopher Nolan. The screenplay was written by Nolan based on his younger brother Jonathan Nolan's short story "Memento Mori". It stars Guy Pearce, Carrie-Anne Moss, and Joe Pantoliano. Memento is presented as two different sequences of scenes interspersed during the film: a series in black-and-white that is shown chronologically, and a series of color sequences shown in reverse order. The two sequences "meet" at the end of the film, producing one complete and cohesive narrative. Memento premiered on September 5, 2000, at the Venice International Film Festival and was released in European ... more on Wikipedia

Memento is ranked on...

Memento is also found on...