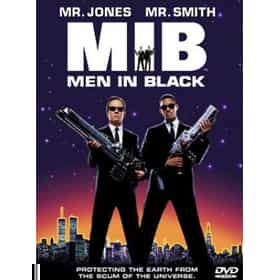 Men in Black is a 1997 American science fiction action comedy film directed by Barry Sonnenfeld, produced by Walter F. Parkes and Laurie MacDonald and starring Tommy Lee Jones and Will Smith. The film was based on Lowell Cunningham's The Men in Black comic book series, originally published by Marvel and Malibu Comics, with a plot following two agents of a secret organization called Men in Black who supervise extraterrestrial lifeforms who live on Earth and hide their existence from ordinary humans. The film featured the creature effects and makeup of Rick Baker and visual effects by Industrial Light & Magic. The film was released on July 2, 1997, by Columbia Pictures and grossed ... more on Wikipedia

The Funniest Quotes From 'Men in Black' 38 votes The best quotes from Men in Black make you realize how funny the movie really is, even if you haven't seen it in a while. Le...

Men in Black is ranked on...

Men in Black is also found on...