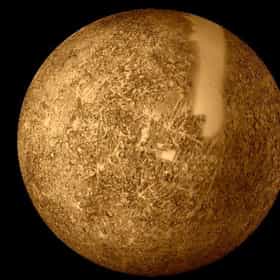 Mercury is the smallest and closest to the Sun of the eight planets in the Solar System, with an orbital period of about 88 Earth days. Seen from the Earth, it appears to move around its orbit in about 116 days, which is much faster than any other planet. This rapid motion may have led to it being named after the Roman deity Mercury, the fast-flying messenger to the gods. Because it has almost no atmosphere to retain heat, Mercury's surface experiences the greatest temperature variation of all the planets, ranging from 100 K at night to 700 K during the day at some equatorial regions. The poles are constantly below 180 K. Mercury's axis has the smallest tilt of any of the Solar ... more on Wikipedia

Mercury is ranked on...

#7 of 15 Places in the Solar System Where Your Death Would Be Most Horrific 29.4k VOTES It's easy to look out into the night sky and imagine the wonders and possibilities that await us among the stars. Tons of sc...
#8 of 8 The Best Planets in the Solar System 4.8k VOTES With this space list, astro-nuts can vote up the best planets in the solar system to settle once for all a question that has...