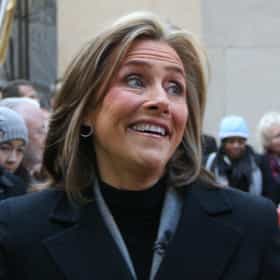 Meredith Louise Vieira (born December 30, 1953) is an American broadcast journalist and television personality. She is best known as the original moderator of the daytime talk show The View (1997–2006), the original host of the syndicated version of the game show Who Wants to Be a Millionaire (2002–2013), and as co-host of the NBC morning news program Today (2006–2011). Vieira has also been a contributor to Dateline NBC, Rock Center with Brian Williams, and NBC Nightly News, and hosted the Lifetime television series Intimate Portrait (1994–2005). From 2014 to 2016, she hosted her own syndicated daytime talk show, The Meredith Vieira Show. ... more on Wikipedia

Meredith Vieira is ranked on...

#9 of 56 The Best Female Talk Show Hosts on TV 1.2k VOTES Though the field is expanding, most of the best female talk show hosts are the faces we see and the voices we hear on mornin...
#13 of 48 People who voted for Meredith Vieira... also upvote Law & Order: Special Victims Unit on The Best NBC Dramas of All Time also upvote Olivia Benson on The Best Primetime NBC Character in 2015 The Best Today Show Hosts 55.4k VOTES List of your favorite Today Show hosts of all time. The best hosts of NBC's famed Today Show are ranked here in or...
#17 of 22 The Best Celebrity Game Show Hosts of All Time 3.3k VOTES There are a lot of celebrity TV game show hosts, and it totally makes sense why: it’s great for marketing, people who like t...
Celebrities Who Are Runners 96.1k VIEWS List of celebrities who run, loosely ranked by fame and popularity. Staying in shape is very important for many famous actor...
Famous People Named Meredith 4.7k VIEWS Who knew there were so many famous people named Meredith in the world? Our list of celebrities named Meredith includes pic...
300+ Famous People Who Went to Prep School 12.5k VIEWS Many of the most powerful people in the world went to prep school. The children of wealthy parents - often "old money&q...
Famous New York Friars Club Members 19.2k VIEWS List of Famous New York Friars Club Members ranked by fame and popularity. The Friars Club is a private club in New York Cit...
Famous People With Eating Disorders 278.6k VIEWS List of famous people with eating disorders, loosely ranked by fame and popularity. Eating disorders are conditions that inv...
100+ Celebrities in Got Milk Ads 42.3k VIEWS Got Milk was an advertising campaign created for the California Milk Processor Board in 1993, that encouraged people to drin...
19 Celebrities with Rhode Island Ties 128.7k VIEWS One of the original 13 colonies, the state of Rhode Island is the hometown for many celebrities, and a few famous people hav...
33 Celebrities Who Ran the New York Marathon 7.8k VIEWS The New York Marathon is a 26.2 mile course that weaves through the five boroughs of the Big Apple. Several celebrities have...
Celebrity Red Sox Fans 106.5k VIEWS List of Celebrity Red Sox Fans ranked by fame and popularity. The Boston Red Sox baseball team has a lot of famous fans. Som...

Meredith Vieira is also found on...