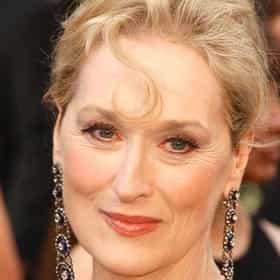 Mary Louise "Meryl" Streep (born June 22, 1949) is an American actress. Often described as the "best actress of her generation", Streep is particularly known for her versatility and accents. Nominated for a record 21 Academy Awards, she has won three. Among other accolades, she has received 31 Golden Globe nominations, winning eight.Streep made her stage debut in Trelawny of the Wells in 1975. In 1976, she received a Tony Award nomination for Best Featured Actress in a Play for 27 Wagons Full of Cotton and A Memory of Two Mondays. In 1977, she made her screen debut in the television film The Deadliest Season, and also made her film debut in Julia. In 1978, she won ... more on Wikipedia

Meryl Streep is ranked on...

Meryl Streep is also found on...