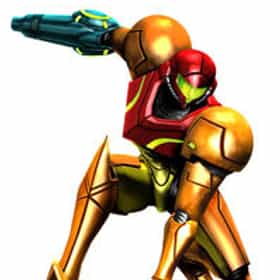 Metroid is a military science fiction themed action-adventure video game, and the first entry in the Metroid series. It was co-developed by Nintendo's Research and Development 1 division and Intelligent Systems, and was released for the Famicom Disk System in Japan on August 6, 1986, and for the Nintendo Entertainment System in North America in August 1987, and in Europe in January 1988. The game was re-released for the Game Boy Advance in October 2004, and for the Wii Virtual Console in Europe in July 2007, in North America in August 2007, and in Japan in March 2008. Metroid was produced by Gunpei Yokoi, directed by Satoru Okada and Yoshio Sakamoto, and had music composed by Hirokazu ... more on Wikipedia

Metroid is ranked on...

#110 of 534 The Most Addictive Video Games of All Time 362.4k VOTES The most addictive games of all time, ranked by the wisdom of the crowd. Anyone can add their video game addictions to this ...
#12 of 176 The Best Video Game Franchises of All Time 251.5k VOTES If someone asked you what the greatest video game franchise of all time was, how would you answer? If you grew up in the 80'...
#99 of 1,578 People who voted for Metroid... also upvote Star Wars Franchise on The Best Fantasy Movies also upvote Captain America Franchise on The Best Superhero Movies Ever Made The 100+ Best Video Games of All Time, Ranked by Fans 989.2k VOTES These are the greatest games of all time, as voted on and reranked by gamers like yourself. Video games are more popular tha...
#37 of 91 Video Games That Should Be Movies 38.2k VOTES What video games should be movies? Several of the most well known and popular video games of all time could easily be made i...
#18 of 269 The Best Classic Video Games 200.8k VOTES Top classic video games from the early years of gaming. This list contains the best games released on any system (arcade, ho...
#69 of 450 The Best Video Game Soundtracks of All Time 52.5k VOTES Asking a group of gamers what the best video game soundtrack of all time is is like asking baseball fans who the best pitche...
#54 of 62 The Best Science Fiction Franchises of All Time 34.3k VOTES Science fiction is a very popular genre in books, films, video games, and television shows. Some of the biggest grossing mov...
#25 of 35 The Most Memorable Video Game Sound Bites of All Time 20.5k VOTES You might be walking down the street or sitting in a subway car when suddenly, you hear it. A little noise, probably coming ...
#14 of 16 The Most Influential Starting Levels In Video Game History 21.7k VOTES This is a list of the best first levels in video game history. What makes a great initial level in a video game? A first s...
#33 of 209 The Best Nintendo Games, Ranked 46.5k VOTES The best Nintendo games of all time include classic NES titles, N64 gems, and new high tech Wii titles. These fan favorite...
#7 of 13 13 Classic Video Games That Unfortunately Haven't Aged Well 3.6k VOTES Video games usually transcend time to become a beloved classic when they have one of three things: great art ...
#9 of 15 The Most Mind-Shattering Videogame Plot Twists Of All Time 3k VOTES What would a videogame story be without a couple of great twists? Surprise videogame endings are pretty much guaranteed&nbsp...
#10 of 20 Great Video Game Movies Waiting to Happen 4.3k VOTES It's always tricky talking about video game movies simply because there isn't a strong history of movies based on video game...
#2 of 11 11 Video Games That Should Get Anime Adaptations 2.3k VOTES Video games and anime go hand in hand. Both mediums rely heavily on engaging art styles, and often use visual stor...
#7 of 10 Cool Video Game Costumes That Look Just Like The Character 251 VOTES Much like how gaming graphics have come a long way throughout the years, the latest video game costumes are becoming mo...
#4 of 25 The Best Classic NES Games To Play On The Switch 251 VOTES There's something to be said about retro consoles, and the NES is easily the most beloved. The original Nintendo brought us ...
#7 of 18 18 Video Games Turned Into Adorable Children's Book Covers 840 VOTES Who would have thought that video game characters would make perfect children's storybook covers? If you answered Los Angele...
#4 of 15 15 Classic Nintendo Games You Forgot You Loved 8.9k VOTES Even with the mind-blowing video games of Xbox and PlayStation today, '80s kids still reminisce about the Nintendo game...
#9 of 14 The Best Metroid Games 2.3k VOTES Here is a list of the best Metroid games, ranked from best to worst by tons of fan votes. If you think the coolest Metroid g...
#22 of 67 The Best Metroidvania Video Games Ever Made 6.7k VOTES Pinning down the best Metroidvania games can be tough. See, Castlevania and Metroid became wildly popular at just about the ...
#7 of 793 People who voted for Metroid... People on the West Coast are 2x more likely to vote for this Every Single NES Game, Ranked From Best to Worst 343.8k VOTES If you’re collecting all Nintendo Entertainment System games ever made, you’re going to need this list of all NES games. The...
#22 of 194 The Best Science Fiction Games of All Time 11.3k VOTES This is a list of the best science fiction games of all time for any console or system, including cover art pictures when av...

Metroid is also found on...