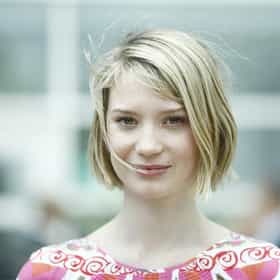 Mia Wasikowska ( VUSH-i-KOF-skə; born 25 October 1989) is an Australian actress. She made her screen debut on the Australian television drama All Saints in 2004, followed by her feature film debut in Suburban Mayhem (2006). She first became known to a wider audience following her critically acclaimed work on the HBO television series In Treatment. She was nominated for the Independent Spirit Award for Best Supporting Female for That Evening Sun (2009). Wasikowska gained worldwide recognition in 2010 after starring as Alice in Tim Burton's Alice in Wonderland and appearing in the comedy-drama film The Kids Are All Right, a role for which she received the Hollywood Awards Breakthrough ... more on Wikipedia

Mia Wasikowska is ranked on...

#368 of 938 People who voted for Mia Wasikowska... also upvote Twilight Saga Franchise on The Most Overrated Movies of All Time The Best Actresses in Film History 1.1M VOTES The best actresses ever are ranked here in this list of the best actresses in film history. These are the greatest actresses...
#174 of 331 The Best Actresses Working Today 386.5k VOTES List of the best actresses working today, ranked. This list includes many of the greatest actresses in film history, but mor...
#77 of 89 Celebrities Who Should Be A-Listers 119.8k VOTES If pop culture has room enough for multiple A-list Jennifers and Chrises, it has enough time to make some space for cer...
#23 of 26 Actors Who Played Animated Disney Characters 9.1k VOTES Disney has been extremely successful in taking its most beloved animated heroes and villains and turning them into live-acti...
Celebrities Who Can Relate To Your Middle Child Syndrome 811 VIEWS Some of the most famous people in the world grew up as the middle child of their families. Famous middle children have succe...
Celebrities Who Used to Dance 10.7k VIEWS It's not surprising that many athletes, actors, and musicians are also dancers. While some actively utilize their dancing sk...
How to Pronounce Tricky Celebrity Names 16.2k VIEWS Not every celebrity name is as straight-forward as "Tom Hanks" and you won't find him anywhere near this list, whi...
20 Celebrities Who Did Ballet 87.3k VIEWS The art of ballet dancing takes years of extreme dedication and discipline to perfect. Some celebrities learned ballet for m...
Famous INFPs 625.3k VIEWS Many of the most popular musicians, authors, and artists are INFPs (Introverted Intuitive Feeling Perceiving). INFPs ar...
Famous People Named Mia 18.2k VIEWS Who knew there were so many famous people named Mia in the world? Our list of celebrities named Mia includes pictures and in...

Mia Wasikowska is also found on...