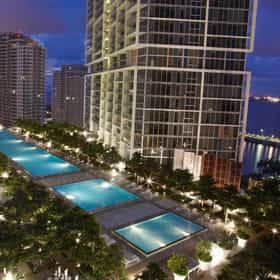 Miami is a city located on the Atlantic coast in southeastern Florida and the county seat of Miami-Dade County. The 42nd most populated city proper in the United States, with a population of 419,777, it is the principal, central, and most populous city of the Miami metropolitan area, and the most populous metropolis in the Southeastern United States after Washington, D.C. According to the U.S. Census Bureau, Miami's metro area is the eighth most populous and fourth-largest urban area in the United States, with a population of around 5.5 million. Miami is a major center and a leader in finance, commerce, culture, media, entertainment, the arts, and international trade. In 2012, Miami ... more on Wikipedia

The Top Rappers from Miami 25.1k votes Florida. A state known for its oranges, its family oriented vacation spots, its retirees and now, its thriving hip hop commu...
The Best TV Shows Set In Florida 303 votes Florida, Miami in particular, catches the imagination when it comes to television series. It's not just that Florida knows h...
The Best Miami Street Art 134 votes When it comes to street art, Miami is home to some of the best in the United States. If you ever have the chance to visit Mi...

Miami is ranked on...

Miami is also found on...

Cleanest Cities in the US Forbes' Traveller List: 30 Most Visited Cities in US U.S. Cities with the Largest Puerto Rican Population US Cities With Skate Parks & Skate Spots