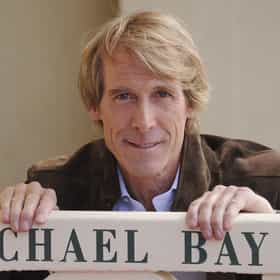 Michael Benjamin Bay (born February 17, 1965) is an American filmmaker known for directing and producing big-budget, high-concept action films characterized by fast cutting, stylistic visuals and extensive use of special effects, including frequent depictions of explosions. The films he has produced and directed, which include Armageddon (1998), Pearl Harbor (2001) and the Transformers film series (2007–present), have grossed over US$7.8 billion worldwide, making him one of the most commercially successful directors in history.He is co-founder of commercial production house The Institute, a.k.a. The Institute for the Development of Enhanced Perceptual Awareness. He co-owns Platinum ... more on Wikipedia

Michael Bay is ranked on...

#313 of 571 Things That Are Not As Cool As People Think They Are 1.1M VOTES Jorts are the dumbest things I've ever seen. Next to Toms shoes. Next to the Toyota Prius. Next to d-bags taking pictures of...
#22 of 25 Wealthy People Who Are Basically Supervillains 160.3k VOTES It's a real mystery how you get to be one of the ultra-wealthy elite of the world. Investments, probably? An inheritanc...
#1 of 161 The Most Overrated Directors of All Time 39.1k VOTES List of the most overacted directors in the film industry of all times. Often the success, both critically and financially, ...
#15 of 16 16 Celebrities You Would Never Guess Are Secretly Insanely Talented 3k VOTES There is no question that there are many talented celebrities out there, but there seems to be quite a few famous folks in t...
#32 of 49 People We Loved to Hate in 2011 2.7k VOTES The people we loved to hate in 2011 includes those that irritated us on reality television, those that refused to understand...
17 Directors Who Are Notoriously Difficult to Work With 105.9k VIEWS Want to be a glamorous Hollywood movie star? Well, you might think twice when you hear what working for some of these direct...
Filmmakers and Actors Who Apologized for Their Movies 29.5k VIEWS Considering how many movies get made across the globe each year, there are surprisingly few directors, actors, and screenwri...
#18 of 103 Who Is The Most Famous Mike/Michael In The World? 1.3k VOTES How many celebrities named Michael can you think of? The famous Mikes and Michaels below have many different professions, in...
100 Highest Paid Celebrities in the World: Power List 2012 29.9k VIEWS Who are the 100 highest paid celebrities in the world? The celebrity power list of 2012 includes rich and famous people from...
Celebrity Heat Fans 6.9k VIEWS With rosters that have included Dwyane Wade, LeBron James, Shaquille O'Neal, Alonzo Mourning, and Chris Bosh, the Miami Heat...

Michael Bay is also found on...