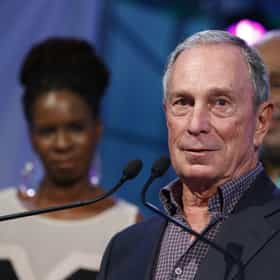 Michael Rubens Bloomberg KBE (born February 14, 1942) is an American businessman, politician, author, and philanthropist. As of April 2019, his net worth was estimated at $62.1 billion, making him the sixth-richest person in the United States and the ninth richest person in the world. He has joined The Giving Pledge, whereby billionaires pledge to give away at least half of their wealth. To date, Bloomberg has given away $8.2 billion, including his November 2018 $1.8 billion gift to Johns Hopkins University for student aid—the largest private donation ever made to a higher education institution.Bloomberg is one of the founders, CEO, and owner of Bloomberg L.P., a global financial ... more on Wikipedia

Michael Bloomberg is ranked on...

#213 of 223 Lying Politicians: The Worst Liars In American Politics 431.2k VOTES Do any politicians tell the truth anymore? Maybe, but you won't find them here. This list has the least trustworthy people i...
#266 of 266 The Greatest Male Celebrity Role Models 104k VOTES Male celebrities as role models... what are we looking for? Maybe someone who knows how to lead, be a good team member, or h...
#29 of 37 37 Glorious Vintage Photos of US Politicians 98k VOTES Enjoy these vintage picturess of politicians when they were young. This list features politicians' high school yearbook pict...
#8 of 32 The Most Powerful People on Twitter 2.7k VOTES Who are the most powerful people on Twitter? Let's be clear: Having millions of followers, just because you are super-famous...
#25 of 99 People who voted for Michael Bloomberg... People on the West Coast are 2x more likely to vote for this US Political Figures We Hate the Most: 2013 28.5k VOTES I'm starting this list with the political figures I hate the most, but I'm opening it to voting and to the public. Obviously...
#44 of 49 People We Loved to Hate in 2011 2.7k VOTES The people we loved to hate in 2011 includes those that irritated us on reality television, those that refused to understand...
#45 of 55 The Most Influential People of 2012 7.2k VOTES The most influential people of 2012 include world leaders, CEOs, athletes, actors, musicians and many others who made an imp...
Diana Ross Loves and Hookups 15k VIEWS Who is Diana Ross dating? Many famous men have dated Diana Ross, and this list will give you more details about these lucky ...
#21 of 103 Who Is The Most Famous Mike/Michael In The World? 946 VOTES How many celebrities named Michael can you think of? The famous Mikes and Michaels below have many different professions, in...
50 Politicians Who Have Admitted to Smoking Pot 39k VIEWS List of politicians who have admitted to smoking pot. The War on Drugs is always a huge subject of debate within the world o...
Celebrities Who Own Helicopters 38.9k VIEWS List of celebrities who own helicopters loosely ranked by fame and popularity. Famous people like to travel in style and the...
53 Celebrities with Honorary Degrees from Harvard 19k VIEWS This list contains information about celebrities who have received honorary degrees from Harvard University, loosely ranked ...
Forbes 400 Top Richest People in America 118.3k VIEWS The Richest People in America according to Forbes magazine. The 400 wealthiest Americans are listed here for you to sort thr...
40+ Politicians Who Smoked Marijuana 16k VIEWS A list of politicians who smoked marijuana. Smoking pot may lead to tragedy, but it can also lead to the White House. That's...

Michael Bloomberg is also found on...