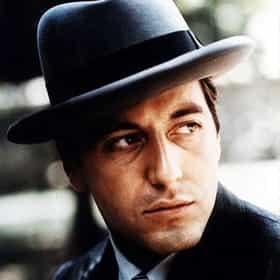 Michael Corleone is a fictional character in Mario Puzo's novels, The Godfather and The Sicilian. He is also the main character of the Godfather film trilogy that was directed by Francis Ford Coppola, in which he was portrayed by Al Pacino, who was twice nominated for an Academy Award for his portrayal. Michael Corleone, as portrayed by Pacino, was recognized as the 11th most iconic villain in film history by the American Film Institute, although some critics consider him to be a tragic hero. ... more on Wikipedia

Michael Corleone is ranked on...

#657 of 817 The Most Annoying TV and Film Characters Ever 1.5M VOTES You know them. You hate them. Honestly, who knows why these characters even exist. Did someone think they were funny? M...
#35 of 3,785 People who voted for Michael Corleone... also upvote Twilight Saga Franchise on The Most Overrated Movies of All Time also upvote Star Wars Franchise on The Best Movies of All Time The Best Movie Characters of All Time 1M VOTES List of the best movie characters of all time, ranked by film buffs and people like you. This list includes performances by ...
#21 of 93 The Most Likable Movie Antiheroes 56.4k VOTES What makes an antihero cool? Well, they’re usually pretty multi-dimensional. They possess villainous qualities, yes, but the...
#37 of 962 People who voted for Michael Corleone... also upvote The Godfather Franchise on The Best Movies of All Time also upvote The Godfather on The Best Movies of All Time The Greatest Movie Villains of All Time 1.2M VOTES While some of us tend to despise movie villains, plenty of movie-goers favor some of these antagonists. Whether that's ...
#37 of 102 Movie Tough Guys Without Super Powers or a Super Suit 36.1k VOTES In the age of the superhero movies, it's easy to forget sometimes that there are tough guys who don't need to hide behind su...
#30 of 86 The Greatest Fictional Bosses 8.6k VOTES A list of the greatest fictional bosses. Do you wish your boss was more like one you saw last night on TV? Looking for an ol...
#1 of 17 17 Characters Who Broke Bad (Other Than Walter White) 1.2k VOTES Change is one of the few commonalities virtually all good fictional characters share. The journey of how they change is...
#13 of 20 The Most Manipulative Characters in Film 2.3k VOTES The word "manipulative" has a natural negative connotation to it. To manipulate does not just mean to convince. It...
#28 of 81 The Fictional Bosses You'd Least Like to Work For 5.8k VOTES List of the fictional bosses you’d least like to work for. Think your boss is bad? Your boss may not even compare to some of...
#2 of 25 Who Are Your Favorite Bad Guy Main Characters? 508 VOTES Even when a movie character is bad to the bone, they can still come across as charming (for the viewer, at least). For this...
#3 of 35 The Best Fictional Characters Who Turn Evil 7.5k VOTES There are thousands of villains in fiction, from television, books, comics, and film, each with their own unique motives and...
#18 of 100 Fictional Characters Named Michael 6.4k VOTES Ever consider the long list of notable fictional characters whose name is Michael? There are quite a few. The fictional...
8 Stars Whose Unpopular Acting Methods Created Hugely Popular Characters 35.7k VIEWS Actors can be divas, but sometimes actors "acting out" can actually work in a film's favor. In a few cases,&n...
#1 of 44 The Best Al Pacino Characters 4.9k VOTES Here are the best Al Pacino characters, ordered from best to worst along with movie trailers or clips. These ...
#4 of 27 The Greatest Gangster Characters In Movies 275 VOTES When it comes to gangster movies, it’s the bonds between the characters that make these films so great. No matter how many s...

Michael Corleone is also found on...