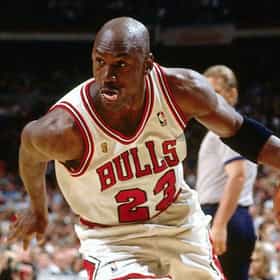 Michael Jeffrey Jordan (born February 17, 1963), also known by his initials MJ, is an American former professional basketball player and the principal owner of the Charlotte Hornets of the National Basketball Association (NBA). He played 15 seasons in the NBA, winning six championships with the Chicago Bulls. His biography on the official NBA website states: "By acclamation, Michael Jordan is the greatest basketball player of all time." He was one of the most effectively marketed athletes of his generation and was considered instrumental in popularizing the NBA around the world in the 1980s and 1990s.Jordan played three seasons for coach Dean Smith with the North Carolina Tar ... more on Wikipedia

16 Crazy Stories and Rumors About Michael Jordan 16.7k views Michael Jordan is (arguably) the greatest basketball player who ever graced an NBA court, and you don’t become the best at a...
Ranking Every Air Jordan Sneaker Ever Made 6.7k votes Since their inception in 1985, Nike Air Jordans have found a place both on the court and within pop culture. Each year anoth...

Michael Jordan is ranked on...

Michael Jordan is also found on...