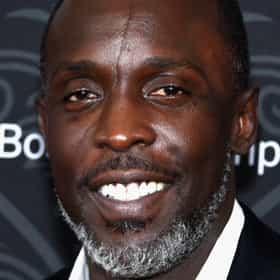 Michael Kenneth Williams (born November 22, 1966) is an American actor. He played Omar Little on the HBO drama series The Wire and Albert "Chalky" White on the HBO series Boardwalk Empire. He was also acclaimed for his role as Jack Gee, husband of Bessie Smith, in the HBO telefilm biopic Bessie. He has acted in supporting roles in a number of films and television series, including The Road, Inherent Vice, The Night Of, Gone Baby Gone, 12 Years a Slave, When We Rise and When They See Us. Williams received three Primetime Emmy Award for Outstanding Supporting Actor in a Limited Series or Movie nominations for his roles in Bessie (2015), The Night Of (2016) and When They See Us ... more on Wikipedia

Michael K. Williams is ranked on...

#47 of 56 The Greatest Non-White Actors in Hollywood 3.7k VOTES With audiences pushing Hollywood towards increased diversity both on- and off-screen, now is the perfect time to celebrate t...
#34 of 82 The Greatest Actors Who Have Never Won an Emmy (For Acting) 29.5k VOTES What do Steve Carrell, Jerry Seinfeld, and Ed O'Neill have in common? No, it's not fame, fortune, or prestige. (Although t...
#13 of 103 Who Is The Most Famous Mike/Michael In The World? 1.4k VOTES How many celebrities named Michael can you think of? The famous Mikes and Michaels below have many different professions, in...
Straight Actors Who Have Played Gay Characters 120k VIEWS List of gay characters played by straight actors, loosely ranked by fame and popularity. One of the great things about being...
33 Celebrities Who Ran the New York Marathon 7.9k VIEWS The New York Marathon is a 26.2 mile course that weaves through the five boroughs of the Big Apple. Several celebrities have...
Character Actors You See All Over But Probably Can't Name 54k VIEWS The good news is that with the advent of streaming channels and a sprawl of cable slots, there are lots of roles for male ...
Male Celebrities Who Are 5’10" 26.8k VIEWS This list contains examples of male celebs who are 5'10" loosely ranked by fame and popularity. Standing above the aver...