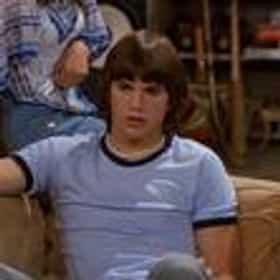 Michael Christopher Kelso, usually referred to simply as Kelso by his friends, is one of the five male leads on Fox Network's That '70s Show, portrayed by Ashton Kutcher. Tall, lanky and long-haired, Kelso had been accepted as the local idiot until he moved to Chicago for the eighth season. His behavior is very much in line with a stereotypical oversexed lunkhead or a male-bimbo who gets through life on his good looks. He spends most of the series in a mutually parasitic relationship with the equally vapid Jackie Burkhart, whom he continues to obsess over following their numerous breakups. In spite of his stupidity, Kelso was shown on several occasions not to be immature, simply ... more on Wikipedia

Michael Kelso is ranked on...

Michael Kelso is also found on...