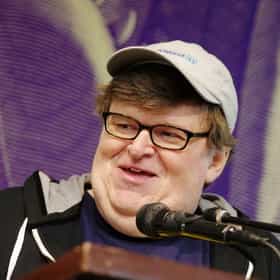 Michael Francis Moore (born April 23, 1954) is an American documentary filmmaker and author. He is best known for his work on globalization and capitalism. Moore has been labeled a left-wing documentary filmmaker and left-wing political activist, however, he rejects the label "political activist".Moore won the 2002 Academy Award for Best Documentary Feature for Bowling for Columbine, which examined the supposed causes of the Columbine High School massacre and the overall gun culture of the United States. He also directed and produced Fahrenheit 9/11, a critical look at the presidency of George W. Bush and the War on Terror, which earned $119,194,771 to become the ... more on Wikipedia

Michael Moore is ranked on...

#5 of 113 People who voted for Michael Moore... People outside of the US are 2x more likely to vote for this The Most Influential Contemporary Americans 142.1k VOTES A list of the Americans who have had the most central influence on, or importance to, the modern era. This would include Ame...
#17 of 152 The Most Ridiculous Political Pundits 166.7k VOTES This is a bipartisan list of the most over-the-top, spittle-stained, fist-thumping, hyperbolic political pundits of all ti...
#56 of 771 American Public Figures Who Are National Treasures 229.7k VOTES America's national treasures work in different fields, are of different generations, and all have different stories to ...
#9 of 102 The Lamest Authors of All Time 71.5k VOTES There are always going be writers (and books) some folks just don't like. Books, and the skills of the people who write th...
#97 of 1,445 Celebrity Death Pool 2018 477.7k VOTES Welcome to Celebrity Death Pool 2018! In increasingly uncertain times, there remains one constant in life - we all die. Cele...
#42 of 101 People We Loved to Hate in 2012 12.4k VOTES People we loved to hate in 2012 include popular names in sports, entertainment, and, of course in an election year, politics...
#127 of 159 The Best Directors of the 2000s 3.8k VOTES The best directors of the 2000s rank among some of the greatest living directors and most among the best directors of all ti...
#31 of 103 Who Is The Most Famous Mike/Michael In The World? 1.9k VOTES How many celebrities named Michael can you think of? The famous Mikes and Michaels below have many different professions, in...
All The Celebrities Supporting Bernie Sanders 656 VIEWS “Not Me. Us.” is the motto of the Bernie Sanders campaign to become President of the United States in 2020. Along with milli...
Male Celebrities Who Are 6’0" 16.4k VIEWS This list contains examples of male celebs who are 6'0" loosely ranked by fame and popularity. Comfortably taller than ...
#2 of 25 The Best Modern Creative Bands/Artists 148 VOTES Modern creative artists list, with photos, ranked best to worst by votes. List of good modern creative bands includes a filt...
#105 of 105 The Best Avant-garde Jazz Bands/Artists 1.4k VOTES Avant-garde jazz artists list, with photos, ranked best to worst by votes. List of good avant-garde jazz bands includes a fi...
Famous People You Didn't Know Were Boy Scouts 220.9k VIEWS A list of famous people who were real-life scouts. This crowdranked list includes celebrities, politicians and other notab...
Celebrities Who Turned 65 in 2019 5.8k VIEWS UPDATED: Check out the celebrities turning 65 in 2020! Several famous people celebrated their 65th birthdays in 2019. Icon...
The Most Successful Obese Americans 655.9k VIEWS The most successful obese Americans include men and women who despite being overweight, have found mainstream success. These...
EW.com's The 50 Smartest People In Hollywood 33.8k VIEWS EW's list of the most intelligent people in Hollywood. These stars all have extremely high IQs and are the smartest celebrit...

Michael Moore is also found on...