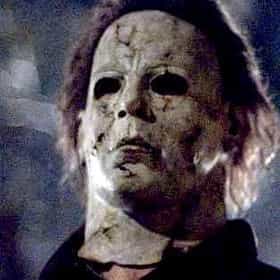 Michael Myers is a fictional character from the Halloween series of slasher films. He first appears in John Carpenter's Halloween as a young boy who goes takes his older sister's life, then fifteen years later returns home to take out more teenagers. In the original Halloween, the adult Michael Myers, referred to as "The Shape" in the closing credits, was portrayed by Nick Castle for most of the film, with Tony Moran and Tommy Lee Wallace substituting in during the final scenes. The character was created by Debra Hill and John Carpenter and has appeared in nine films, as well as novels, a video game, and several comic books. ... more on Wikipedia

Michael Myers is ranked on...

#13 of 961 People who voted for Michael Myers... also upvote Harry Potter Franchise on The Best Movies of All Time also upvote Friday the 13th Franchise on The Greatest Horror Films of All Time The Greatest Movie Villains of All Time 1.2M VOTES While some of us tend to despise movie villains, plenty of movie-goers favor some of these antagonists. Whether that's ...
#1 of 74 People who voted for Michael Myers... also upvote Friday the 13th Franchise on The Greatest Horror Films of All Time also upvote A Nightmare on Elm Street Franchise on The Greatest Horror Films of All Time The Most Utterly Terrifying Figures in Horror Films 155.7k VOTES This is a list of the most chillingly terrifying figures in film, as ranked and voted on by horror fans. There are a lot of ...
#6 of 40 The Creepiest Kids in Horror Movies 29.5k VOTES The creepiest kids in horror movies are those scary little brats that despite being young, scare the living crap out of adul...
#2 of 12 The Dumbest Horror Villain Origin Stories 1k VOTES It’s hard work to make a good horror movie villain. They need to have a good look and a freaky attitude, and it helps if the...
#1 of 53 53 Behind The Scenes Photos Of Movie Villains 176.6k VOTES Some of the greatest movie villains can give you nightmares if you spend too much time thinking about their faces. But ...
#4 of 18 Horror Villains Who Are Ruined By Having Backstories 43k VOTES Horror movie villains are something of an anomaly in the film world; more often than not, the less you know about them, the ...
#8 of 19 Famous Villains Whose Looks Have Totally Changed 5.9k VOTES It’s a fact of life that any film or television show that you love will be remade and you probably won’t like what the new g...
#13 of 16 The Cutest Funkos Of The Most Irredeemably Evil Characters 292 VOTES Funko Pop has expanded its line to include a ton of characters, from Cinderella's adorable Gus Gus to horror icons...
#5 of 25 Who Are Your Favorite Bad Guy Main Characters? 530 VOTES Even when a movie character is bad to the bone, they can still come across as charming (for the viewer, at least). For this...
#1 of 14 The Greatest Movie Villains From The '70s 448 VOTES Close the curtains and lock the doors as we rank the greatest horror villains of the ‘70s. The 1970s was an interesting time...
#24 of 34 The Greatest Masked Characters 13.7k VOTES In fiction, masks are often used to disguise secret identities. These masks usually become as iconic, if not more so, than t...
Based On Your Zodiac Sign, Which Horror Movie Villain Would You Be? 98.3k VIEWS Have you ever looked at your horoscope and noticed some creepy zodiac sign traits? Or have you read something about yourself...
#5 of 24 The Greatest '90s Horror Villains 719 VOTES The 1990s were an interesting time for horror films.  It was a time when most of our beloved horror icons were starting...
Horror Movie Villains with High Kill Counts 217.1k VIEWS We all (occasionally) enjoy watching people get slain in horror films, but we seldom think of the villain's overall kil...

Michael Myers is also found on...