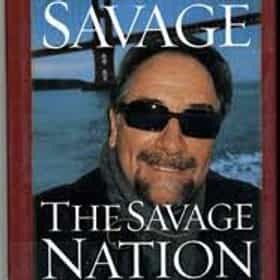 Michael Alan Weiner (born March 31, 1942), better known by his professional name Michael Savage, is an American radio host, author, activist, nutritionist, and conservative political commentator. He is the host of The Savage Nation, a nationally syndicated talk show that aired on Talk Radio Network across the United States until 2012, and in 2009 was the second most listened-to radio talk show in the country with an audience of over 20 million listeners on 400 stations across the United States. Since October 23, 2012, Michael Savage has been syndicated by Cumulus Media Networks. He holds master's degrees from the University of Hawaii in medical botany and medical anthropology, and a ... more on Wikipedia

Michael Savage is ranked on...

#278 of 531 Annoying Celebrities Who Should Just Go Away Already 1.2M VOTES The most annoying celebrities, ranked by entertainment fans themselves. These annoying celebs are obnoxious, overexposed, ...
#24 of 166 The Most Ridiculous Political Pundits 162.6k VOTES This is a bipartisan list of the most over-the-top, spittle-stained, fist-thumping, hyperbolic political pundits of all ti...
Celebrities You Didn't Know Use Stage Names 1.7M VIEWS List of celebrities with stage names, loosely ranked according to fame and popularity. It's tough to break into show busin...
Here's a List of Every Known Republican Celebrity 1.8M VIEWS Conservative celebrities - this list of Republican celebrities has over 400 celebrities who are Republicans. What celebritie...
#67 of 103 Who Is The Most Famous Mike/Michael In The World? 921 VOTES How many celebrities named Michael can you think of? The famous Mikes and Michaels below have many different professions, in...
Famous People Who Don't Like Game of Thrones 86.4k VIEWS It seems like just about everyone you know is absolutely obsessed with Game of Thrones. Already six seasons in, the show sti...

Michael Savage is also found on...