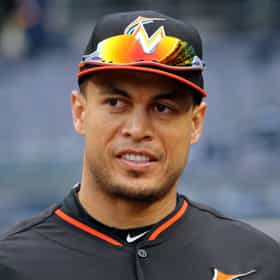 Giancarlo Cruz Michael Stanton (born November 8, 1989), formerly known as Mike Stanton, is an American outfielder and designated hitter for the New York Yankees of Major League Baseball (MLB). He made his major league debut in 2010 as a member of the Miami Marlins, with whom he played until the end of the 2017 season. Stanton has twice led the National League (NL) in home runs; he hit 59 home runs in 2017, the most in 16 years. Known for his prodigious physical strength and ability to regularly hit long home runs, Stanton stands 6 feet 6 inches (1.98 m) tall and weighs 245 pounds (111 kg). He bats and throws right-handed. Stanton is originally from the Greater Los Angeles region. He ... more on Wikipedia

Giancarlo Stanton is ranked on...

#11 of 286 People who voted for Giancarlo Stanton... also upvote Star Trek Franchise on The Best Space Movies also upvote The Hunger Games Franchise on The Most Overrated Movies of All Time The Top Current Baseball Players 219.5k VOTES Who do you think should make the list of the best current players in baseball? Ranked by fans, critics, and sports analysts,...
#92 of 157 The Greatest New York Yankees of All Time 120.8k VOTES These are the greatest Yankees of all-time, voted on by Yankees fans who really know who the best Yankees players of all tim...
#73 of 110 The Greatest Throwing Arms of All Time 22.2k VOTES This list of the greatest throwing arms of all time includes some legendary MLB players known for being true flamethrowers f...
#13 of 30 Every MLB Player To Hit 50 Home Runs In A Season 455 VOTES Every baseball player to hit 50 home runs in a season has accomplished a special feat. Whether natural or aided by performan...
#89 of 202 The All-Around Best Athletes of 2018 32.9k VOTES When it comes to being an all-around best athlete, you're not just talking about the leading scorers of all time, or th...
#24 of 58 Who Will Make the 2018 MLB All-Star Game? 7.4k VOTES Once opening day has passed, it's never too early to start making your 2018 MLB All-Star Game predictions. Spring already sp...
#43 of 50 The 50 Most Valuable MLB Players For Fantasy Baseball In 2019 4.1k VOTES Opening Day 2019 is around the corner, and while MLB managers focus on setting their roster and choosing an opening day...
#16 of 41 Who Are The Best Outfielders In Major League Baseball Right Now? 1k VOTES This ranking of the best MLB outfielders currently playing will prove a useful asset to anyone maintaining&nb...
#41 of 42 The Most Likely 2013 MLB All Stars 3.2k VOTES The most likely 2013 MLB All-Stars are those best players in the MLB today from the National League and the American League ...
#8 of 28 Who Will Be The 2017 National League MVP? 5.8k VOTES Every year, the MLB names one player as the National League MVP, the one who every team wants seated in their dugout. O...
#11 of 50 Who Will Win The 2020 American League MVP Award? 712 VOTES While everyone in baseball wants to win a World Series, the best players in the league will all be competing for the 20...
#20 of 125 The Best Current MLB Hitters 20.9k VOTES Whether you're working on your fantasy baseball roster or simply staying updated with the 2018 MLB rankings, ...
#2 of 93 The Best Miami Marlins of All Time 8.5k VOTES This is a list of the greatest Miami Marlins ever. Since their inception in 1993, somehow, someway, the Miami Marlins...
#54 of 138 The Best Hispanic Baseball Players 15k VOTES A list of the best Hispanic baseball players. Hispanic baseball players have been interwoven in the fabric of Major League B...
#68 of 70 Who Is The Most Famous Athlete In The World Right Now? 27k VOTES When it comes to the most famous athletes in the world right now, a select few names easily top the list. Not only that...
The Biggest Contracts in Baseball History 10.9k VIEWS Just when Bryce Harper thought he would go down in the record books with the biggest contract in MLB history from the Philad...

Giancarlo Stanton is also found on...