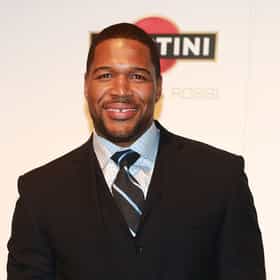 Michael Anthony Strahan (; born November 21, 1971) is an American former football defensive end who spent his entire 15-year career with the New York Giants of the National Football League (NFL). Strahan set a record for the most sacks in a season in 2001, and helped the Giants win Super Bowl XLII over the New England Patriots in his final season in 2007. After retiring from the NFL, Strahan became a media personality. Strahan was elected to the Pro Football Hall of Fame in 2014. He is currently a football analyst on Fox NFL Sunday, and co-host of ABC's Strahan and Sara. He was previously on the syndicated daytime talk show Live! with Kelly and Michael with co-host Kelly Ripa from 2012 ... more on Wikipedia

Michael Strahan is ranked on...

#65 of 1,540 The Best Football Players Ever 1M VOTES One of the hot topics of debate not only among NFL fans but pundits as well is who is the best football player of all time. ...
#23 of 508 The Greatest Defenders in NFL History 134.9k VOTES This list of the greatest defenders in NFL history is here to decide definitively who is the best defender in NFL history. T...
#61 of 80 Who Is America's Boyfriend in 2016? 39.3k VOTES What does America's boyfriend even mean? You know, he's the sweet, good-looking leading man (or hot new male celeb taking Ho...
#922 of 1,452 Celebrity Death Pool 2018 477.7k VOTES Welcome to Celebrity Death Pool 2018! In increasingly uncertain times, there remains one constant in life - we all die. Cele...
#41 of 51 The Game Show Hosts With The Most 5.6k VOTES If you're a fan of quiz shows like Jeopardy, then you probably already know how important a great game show hosts are to the...
#27 of 35 The Best Former Athletes Turned Actors 13.1k VOTES You probably didn’t even know that some of your favorite actors got their start in the sports world! In fact, several athlet...
#2 of 144 The Best New York Giants of All Time 63.4k VOTES This is a list of the best New York Giants of all time. Formed in 1925, the New York Football Giants are a name as recogniza...
275+ Celebrities with Twin Children 396.8k VIEWS List of celebrities who have twin children, along with the names of the kids, their years of birth, and their other parent...
#117 of 148 Dreamcasting Celebrities We Want To See On The Masked Singer 6.9k VOTES The US version of The Masked Singer has taken social media by storm and no wonder. With secret, costumed celebrities and clu...
#29 of 64 The Best Morning Show Hosts & Anchors 4.1k VOTES Many people's morning rituals involve sitting down with their breakfast and watching their favorite morning news show. There...
#16 of 103 Who Is The Most Famous Mike/Michael In The World? 1k VOTES How many celebrities named Michael can you think of? The famous Mikes and Michaels below have many different professions, in...
Celebrities Who Hunt 6.8k VIEWS “There’s something very basic, particularly in the masculine psyche, that requires the killing of large animals,” writes The...
Celebrities With Gap Teeth 618.7k VIEWS This is a list of famous people with gap teeth. These gap-toothed celebs have at least one thing in common: they love to smi...
Celebrity Knicks Fans 222.5k VIEWS This list of celebrity Knicks fans is loosely ranked by fame and popularity. The New York Knicks basketball team has a lot o...

Michael Strahan is also found on...