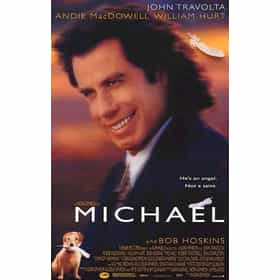 Michael is a 1996 American fantasy film directed by Nora Ephron. The film stars John Travolta as the Archangel Michael, who is sent to Earth to do various tasks. The cast includes Andie MacDowell, William Hurt, Bob Hoskins, Joey Lauren Adams and Robert Pastorelli as people who cross Michael's path. This was the last Turner Pictures to be distributed by New Line Cinema, Warner Bros. would be distributed in the home video release of Michael and the theatrical release of Fallen. The original music score was composed by Randy Newman. ... more on Wikipedia

Michael is ranked on...

Michael is also found on...