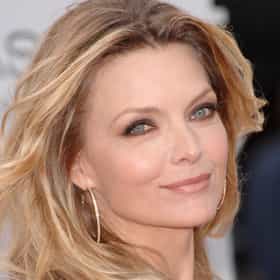 Michelle Marie Pfeiffer (; born April 29, 1958) is an American actress and producer. She has received many accolades, including a Golden Globe Award, and three nominations for an Academy Award. Pfeiffer began to pursue an acting career in 1978 and had her first leading role in the musical film Grease 2 (1982). Frustrated with being typecast as the token pretty girl, she actively pursued more serious material and had her breakthrough role as gangster moll Elvira Hancock in the crime film Scarface (1983). Further success came with leading roles in the fantasy feature The Witches of Eastwick (1987) and the comedy Married to the Mob (1988). Her roles in Dangerous Liaisons (1988) and The ... more on Wikipedia

Michelle Pfeiffer is ranked on...

Michelle Pfeiffer is also found on...