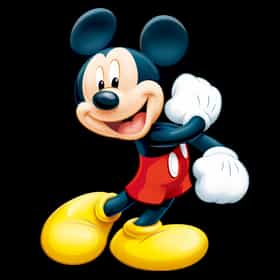 Mickey Mouse is a cartoon character and the mascot of The Walt Disney Company. He was created by Walt Disney and Ub Iwerks at the Walt Disney Studios in 1928. An anthropomorphic mouse who typically wears red shorts, large yellow shoes, and white gloves, Mickey is one of the world's most recognizable characters. Created as a replacement for a prior Disney character, Oswald the Lucky Rabbit, Mickey first appeared in the short Plane Crazy, debuting publicly in the short film Steamboat Willie (1928), one of the first sound cartoons. He went on to appear in over 130 films, including The Band Concert (1935), Brave Little Tailor (1938), and Fantasia (1940). ... more on Wikipedia

Mickey Mouse is ranked on...

#12 of 174 The Best To Worst Kingdom Hearts Characters 25.2k VOTES Kingdom Hearts is a magical action-adventure RPG gaming series combining the worlds of Disney and Final Fantasy, b...
#3 of 303 People who voted for Mickey Mouse... also upvote Tom and Jerry on The Best Cartoons of All Time also upvote Stewie Griffin on The Funniest TV Characters of All Time The Greatest Cartoon Characters in TV History 809.6k VOTES Throughout the annals of TV history, cartoon stars have shone brightly, bringing joy to children and adults alike....
#23 of 129 The Most Memorable Advertising Mascots of All Time 45.6k VOTES For as long as there's been advertising, companies have been trying to find a way to stand apart from each other with mascot...
#39 of 162 The Best Cartoon Characters of the 90s 291.6k VOTES The 1990s was a time when all types of cartoons were introduced to the general public and thrived within the the realm of po...
#6 of 134 People who voted for Mickey Mouse... also upvote Star Trek Franchise on The Best Alien Movies Ever Made also upvote Toy Story Franchise on The Best Movies of All Time The Greatest Talking Animals in TV History 48.6k VOTES List of the greatest talking animals in television history, as ranked by television critics, historians, and fans. Throughou...
#2 of 73 The Greatest Mice in Cartoons & Comics, Ranked by Fans 22.7k VOTES What’s the difference between your favorite cartoon mice (comic book mice too) and a real mouse? For one, you don’t have to ...
#28 of 30 This Artist Turns Disney Characters Into Pokemon Evolutions 66.3k VOTES Ry Spirit is an Australian artist who is active on Instagram and DeviantArt. While he's known for a wide range of incredible...
#11 of 47 The Greatest Fictional Magicians of All Time 4.1k VOTES While there exist plenty of real life famous magicians, there's a limit to things that can be done in real life and that's w...
#25 of 31 The Best NES Characters 3.2k VOTES You'll never forget your first, and for many, the Nintendo Entertainment System was their first encounter with console gamin...
#10 of 11 This Amazing Artist Draws Classic Characters As You've Never Seen Them Before 54.4k VOTES Pancho Vásquez is a skilled 2D artist in Santiago, Chile. His works portray icons in pop culture in a reali...
#42 of 54 The Best Playstation 3 Characters 4.4k VOTES The third iteration of the Playstation console is really when Sony started to separate itself from an identity standpoint. T...
#11 of 26 The Best Wii Characters 1.2k VOTES Out of all the strange ways Nintendo has tried to pull away from the pack of "hardcore" gaming, most tend to agree...
#8 of 8 Classic Cartoon Characters Expose What's Inside 76 VOTES Most pop culture fan art settles for what a character looks like on the outside. The unraveled fictional characters of ...
#2 of 14 14 Times Animated Characters Dressed Up Like Batman 242 VOTES Every young cartoon character grows up with dreams of being Batman. Unfortunately, few get the chance to officially tak...
#10 of 16 Totally Obscure Movie Character Cameos In Cartoons 312 VOTES The fear of copyright infringement (or perhaps lawyers in general) keeps movie character cameos in cartoons intricately stea...
#1 of 85 The Greatest Mouse Characters of All Time 7.6k VOTES For this poll we've created a list of the greatest mouse characters of all time, featuring mice you know from movies, televi...
20 Iconic Cartoon Characters And Their Evolution Over Time 425.1k VIEWS It comes as no surprise the longest-running primetime scripted television series in history is a cartoon. Aft...
#15 of 21 Easy Costumes If You Already Have Black Leggings 287 VOTES With Halloween closing in fast, it's time to turn to your closet and see if you have anything that you can make a last-minut...
#13 of 27 The Best Disney Names to Give a Dog 195 VOTES Disney has produced some of the most beloved movies of all time. From Snow White and the Seven Dwarfs to Froz...
Hilarious '90s Frozen Food Mascots You Forgot About Till Now 15.4k VIEWS Were there any more comforting figures in your youth than the mascots of your favorite frozen foods? If you answered yes the...

Mickey Mouse is also found on...