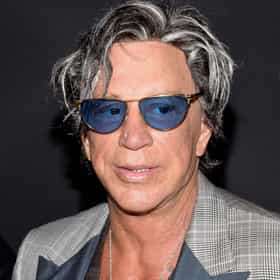 Philip Andre "Mickey" Rourke Jr. (; born September 16, 1952), is an American actor, screenwriter, and former boxer, who has appeared primarily as a leading man in drama, action, and thriller films. During the 1980s, Rourke starred in the comedy-drama Diner (1982), the drama Rumble Fish (1983), the crime-black comedy film The Pope of Greenwich Village (1984), and the erotic drama 9½ Weeks (1986). He received critical praise for his work in the Charles Bukowski biopic Barfly and the horror mystery Angel Heart (both 1987). In 1991, Rourke teamed up with Don Johnson and Tom Sizemore in the cult classic action film Harley Davidson and the Marlboro Man; also in 1991, ... more on Wikipedia

The Best Mickey Rourke Movies 3.6k votes Thought he may not look it anymore, Mickey Rourke was once a heartthrob that every studio wanted to star in their pictures...
24 Pictures of Young Mickey Rourke 770 votes This slideshow features some handsome photos of a young Mickey Rourke. Born Phillip Andre Rourke on September 16, 1962, Rour...
The Rise, Fall, And Return Of Mickey Rourke's Face 436k views Hollywood is always looking for the next rising star among the hottest male celebrities, someone handsome and brooding with ...

Mickey Rourke is ranked on...

Mickey Rourke is also found on...