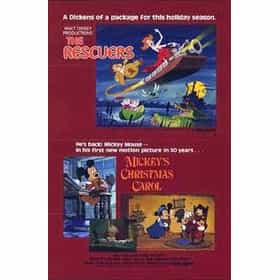 Mickey's Christmas Carol is a 1983 American animated fantasy short film produced by Walt Disney Pictures and released by Buena Vista Distribution. It was directed and produced by Burny Mattinson. The cartoon is an adaptation of Charles Dickens' A Christmas Carol, starring Scrooge McDuck as Ebenezer Scrooge. Many other Disney characters, primarily from the Mickey Mouse universe, Robin Hood, and The Adventures of Ichabod and Mr. Toad, were cast throughout the film. Mickey's Christmas Carol was largely an animated adaptation of a Disneyland Records 1974 audio musical entitled An Adaptation of Dickens' Christmas Carol. The musical featured similar dialogue and cast of characters with the ... more on Wikipedia

Mickey's Christmas Carol is ranked on...

#152 of 598 The Best Animated Films Ever 974.4k VOTES The best animated movies of all time are an assortment of animated movies that rank among the best movies ever made. Wh...
#260 of 571 The Greatest Movies Of The 1980s, Ranked 527.4k VOTES Since it was one of the greatest decades for film, here's a list of the best movies of the 80s. These are the most popu...
#71 of 110 The Best Disney Animated Movies of All Time 457.3k VOTES Since the 1930s, the Walt Disney Studios have been behind some of the best animated films of all time. This list contains fu...
#73 of 257 The Best Movies for 10-Year-Old Kids 101.7k VOTES The films on this list of the best movies for 10 year olds have been ranked by the community as the best films for this age ...
#24 of 109 The Best Christmas Movies of All Time 417.9k VOTES One of the most telling signs that the holiday season is upon us is when classic Christmas movies begin to flood our TV scre...
#13 of 14 All The Ghosts Of Christmas Yet To Come, Ranked By Scariness 502 VOTES Charles Dickens's A Christmas Carol has been a mainstay of the holiday season for generations. The heartwarming tale of...
#168 of 464 The Best Feel-Good Movies 446.8k VOTES Want to feel warm and fuzzy inside? This is a ranked list of the best feel-good movies that make us experience all the good ...
#65 of 200 The Very Best Children's Movies 70.7k VOTES Kid's movies list--all of the best films for children that were ever made, including classics like E.T. and more recent kid'...
#2 of 19 The Best Ethel Merman Movies 454 VOTES List of the best Ethel Merman movies, ranked best to worst with movie trailers when available. Ethel Merman's highest grossi...