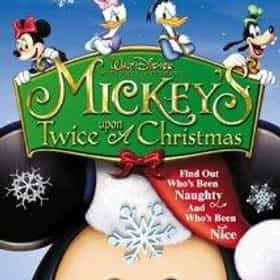 Mickey's Twice Upon a Christmas

Mickey's Twice Upon a Christmas is a 2004 computer-animated direct-to-video fantasy comedy-drama film produced by Disney Toon Studios and the sequel to 1999's Mickey's Once Upon a Christmas. The segments in this video feature Mickey Mouse, Minnie Mouse, Pluto, Goofy, Max, Donald Duck, Daisy Duck, Huey, Dewey and Louie, and Scrooge McDuck in five different segments. Along with the Mickey's PhilharMagic theme park attraction, this production was one of the first to depict the Mickey Mouse series characters with 3D computer animation. ... more on Wikipedia

Mickey's Twice Upon a Christmas is ranked on...

#199 of 589 The Best Animated Films Ever 941k VOTES The best animated movies of all time are an assortment of animated movies that rank among the best movies ever made. Wh...
#148 of 257 The Best Movies for 10 Year Old Kids 99.7k VOTES The films on this list of the best movies for 10 year olds have been ranked by the community as the best films for this age ...
#5 of 32 The Best Disney Movies Available On Netflix 66.3k VOTES List of Disney movies on Netflix. What are the best Disney movies available on Netflix? This list ranks the top Disney movie...
#17 of 35 The Greatest Guilty Pleasure Christmas Movies 2.2k VOTES Whether we like to admit it or not, we all enjoy some guilty pleasure Christmas movies. After all, what better way than...
#5 of 38 The Best Christmas Movies On Netflix 5.9k VOTES One of the best parts of Christmas and the holidays is cozying up in front of the television with family and friends, watchi...
#8 of 33 The Best Kellie Martin Movies 283 VOTES List of the best Kellie Martin movies, ranked best to worst with movie trailers when available. Kellie Martin's highest gros...
#56 of 77 The Best Computer Animation Movies 5.8k VOTES A list of all the best computer animation movies ever made, many of which are streaming on Netflix and Amazon Prime. This co...
The Visual Evolution Of Mickey Mouse 455 VIEWS The evolution of Mickey Mouse is a fascinating one. Since the character debuted in Steamboat Willie in 1928, Mickey has...

Mickey's Twice Upon a Christmas is also found on...