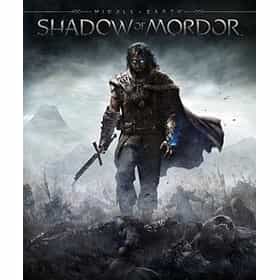 Middle-earth: Shadow of Mordor is an open world action-adventure video game developed by Monolith Productions and published by Warner Bros. Interactive Entertainment. The game was released for Microsoft Windows, PlayStation 4, and Xbox One in September 2014 and PlayStation 3 and Xbox 360 in November 2014. An original non-canon story set in the legendarium created by J. R. R. Tolkien, the game takes place between the events of The Hobbit and The Lord of the Rings. ... more on Wikipedia

Middle-earth: Shadow of Mordor is ranked on...

#446 of 1,578 The 100+ Best Video Games of All Time, Ranked by Fans 989.2k VOTES These are the greatest games of all time, as voted on and reranked by gamers like yourself. Video games are more popular tha...
#13 of 118 The Best Playstation 4 Games Released So Far 41.4k VOTES If you've recently purchased a PS4 and are wondering which titles you should pick up immediately, you've come to the ri...
#17 of 60 The Best Playstation 4 RPGs Released So Far 15.4k VOTES PlayStation has a rich history of releasing some of the best role-playing games, and the PS4 is no exception. This list rank...
#4 of 41 The Best Xbox One Adventure Games 972 VOTES Wondering what the best Xbox One adventure games are? This list ranks them all, with the help of votes from gamers like you....
#17 of 60 The Best Xbox One RPGs Released So Far 5.6k VOTES So you've just bought an Xbox One, and are looking to satiate your appetite for role-playing games. Microsoft has never been...
#2 of 10 The 10 Most Unsatisfying Game Endings In History 1.3k VOTES For gamers, one of the worst feelings in the world is when, after you've logged hundreds of hours into a video game and&nbsp...
#5 of 37 The Best Xbox One Games Released So Far 2k VOTES This is an ongoing list of the best Xbox One games that have been released so far, voted on by other gamers like you. Micros...
#14 of 53 The Best Playstation 4 Adventure Games 1.9k VOTES With the arrival of No Man's Sky, it's time to rank the best Playstation 4 adventure games released on the console so far. A...
#6 of 20 The Best Cross-Platform Games 569 VOTES Sometimes the best video games aren’t console exclusive. They’re inclusive cross platform video games, which means those gam...
#61 of 545 The Best XBox 360 Games of All Time, Ranked 34.2k VOTES The Xbox 360 is one of the most popular consoles of all time, so it’s only natural that fans like you want to know what are ...
#37 of 214 The Best Action Role-Playing Games of All Time 88.6k VOTES These are the best action role-playing games of all time for any console or system, including cover art pictures when availa...
#12 of 35 The 30+ Best PC Adventure Games on Steam 809 VOTES There are so many good PC adventure games on Steam, but which of them are worth playing? If you love getting lost on a journ...
#29 of 42 The 25+ Best PC RPGs on Steam 6.4k VOTES So you're looking for some good RPGs on Steam, but you're frustrated browsing the Steam store and seeing titles that feel li...
#17 of 30 The Best PlayStation 4 Open World Games 1.5k VOTES When it comes to good open world games for Playstation 4, there is a pretty good amount of variety. For that reason, we're r...
#11 of 35 The 30+ Best PC Action Games on Steam 777 VOTES If you're looking for the best PC action games on Steam, look no further. This list ranks the best PC action games you can b...
#12 of 32 The 30+ Best PC Parkour Games on Steam 1.7k VOTES You're looking for PC parkour games to buy on Steam, but what the heck is a parkour game anyways? You might call these PC ru...
#14 of 25 Great Games For People Who Love 'The Outer Worlds' 100 VOTES The action RPG is one of the most well-populated (and well-loved) genres in gaming, and The Outer Worlds is one of the best ...