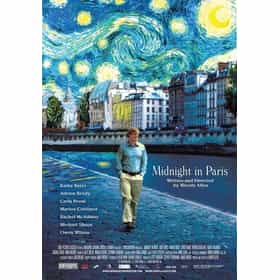 Midnight in Paris is an American 2011 romantic comedy fantasy film written and directed by Woody Allen. Set in Paris, the film follows Gil Pender, a screenwriter, who is forced to confront the shortcomings of his relationship with his materialistic fiancée and their divergent goals, which become increasingly exaggerated as he travels back in time each night at midnight. The movie explores themes of nostalgia and modernism. Produced by the Spanish group Mediapro and Allen's Gravier Productions, the film stars Owen Wilson, Rachel McAdams, Marion Cotillard, Léa Seydoux, Kathy Bates and Adrien Brody. It premiered at the 2011 Cannes Film Festival and was released in North ... more on Wikipedia

Midnight in Paris is ranked on...

Midnight in Paris is also found on...