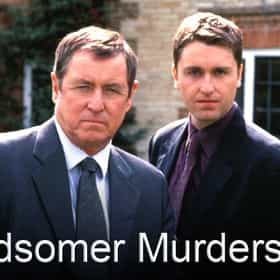 This is a British television detective drama that has aired on ITV since 1997. The show is based on Caroline Graham's Chief Inspector Barnaby book series, as originally adapted by Anthony Horowitz. The current lead character is DCI John Barnaby, who works for Causton CID. Dudgeon's character is the younger cousin of former lead character DCI Tom Barnaby. Dudgeon permanently joined the show in 2011 following Nettles' departure. ... more on Wikipedia

Midsomer Murders is ranked on...

#360 of 383 The Best TV Shows of The Last 20 Years 1.5M VOTES This best TV show list represents the combined opinions of thousands of TV fans. Anyone can vote on this list of the best TV...
#272 of 391 TV Shows That Only Smart People Appreciate 1.3M VOTES Since about the early 2000s, TV audiences have been blessed with what many experts call The Golden Age of Television. In oth...
#20 of 24 The Best Current Shows You Can Watch With Your Mom 1.1k VOTES The next time you find yourself going home for the holidays or popping over for Mother's day, it's never a bad idea to have ...
#2 of 39 The Best Original Series On Acorn TV 429 VOTES The subscription streaming service Acorn TV has distinguished itself by not only producing original content but by being the...
#1 of 41 The Very Best British Crime Dramas, Ranked 8.2k VOTES British crime dramas are beloved around the world, thanks in part to the detectives who make sure the bad guys receive jus...
#19 of 40 What to Watch If You Love 'Sherlock' 875 VOTES Sherlock is a gripping action/mystery that garnered the love and affection of hordes of fans, but if you’ve finished watchin...
#655 of 686 The Greatest Shows of the 1990s, Ranked 264.5k VOTES In the 1990s, television was one of the fastest growing mediums. More TV shows were popping up than ever before, and ratings...
#5 of 32 The Most Comforting TV Shows In 2019 519 VOTES The next time you're looking to wind down after a long day then look no further than this list of the most comforting shows ...
#23 of 172 The Best Mystery TV Shows 71.8k VOTES The best Mystery TV shows make trying to solve a great mystery exciting for both the fans and characters. Nothing beats the ...
#25 of 29 The Most Relaxing TV Shows In 2019 396 VOTES UPDATE: Check out the most relaxing shows of 2020! Looking for the best 2019 relaxing series? Sure you are. Because there ...
#25 of 64 The Very Best Mystery Shows & Movies 718 VOTES There's something about good mystery movies and television shows that keep you on the edge of your seat. Are ...
#12 of 136 The Best UTV TV Shows 455 VOTES List of popular UTV shows, ranked from best to worst. This list of the top current and cancelled UTV TV series includes the ...