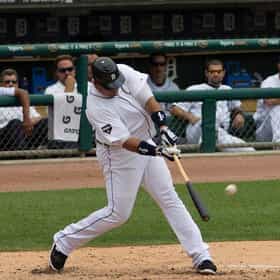 José Miguel Cabrera Torres (born April 18, 1983), commonly known as Miguel Cabrera and nicknamed "Miggy", is a Venezuelan professional baseball player. He is the first baseman for the Detroit Tigers of Major League Baseball (MLB). Since his debut in 2003 he has been a two-time American League (AL) Most Valuable Player (MVP) award winner, a four-time AL batting champion, and an 11-time MLB All-Star. He has played at first and third base for most of his major league career, but primarily played left and right field before 2006. He claimed the 17th MLB Triple Crown in 2012, the first to do so in 45 seasons. In Venezuelan Winter League, Liga de Beisbol Profesional de ... more on Wikipedia

Miguel Cabrera is ranked on...

#14 of 149 The Greatest First Basemen of All Time 60.2k VOTES Who are the greatest first basemen of all time? From the incomparable talents of Lou Gehrig to the stunning abilities of mod...
#6 of 148 The Greatest Hispanic MLB Players Ever 13k VOTES Who are the best Hispanic baseball players? Who are the greatest Hispanic MLB players? This list of the best Hispanic MLB pl...
#23 of 710 People who voted for Miguel Cabrera... People in the Midwest are 2x more likely to vote for this also upvote Barry Sanders on The Best NFL Running Backs of All Time The Best Hitters in Baseball History 270.1k VOTES The best hitters in baseball history are those who hold the all-time hitting records in Major League Baseball, change the ga...
#21 of 122 The Greatest Third Basemen of All Time 35.4k VOTES The greatest third basemen of all time include some veteran MLB players, many of whom are considered among the greatest base...
#23 of 95 The Greatest Out of Shape Athletes in Sports 14.4k VOTES The greatest out-of-shape athletes don't fit the mold of the typical athlete with toned limbs and six-pack abs yet they cont...
#24 of 81 The Best Athletes of 2013 6.4k VOTES The best athletes of 2013 are the league leaders, most valuable player award winners and widely regarded as the top players ...
#1 of 41 The Best MLB First Basemen of 2014 858 VOTES Who is the best MLB first baseman of the 2014 season? This list includes starters and backup first basemen teams in both t...
#1 of 42 The Most Likely 2013 MLB All Stars 3.2k VOTES The most likely 2013 MLB All-Stars are those best players in the MLB today from the National League and the American League ...
#12 of 13 The Most Impressive Triple Crown Seasons In Baseball History 104 VOTES All 13 players to achieve the Triple Crown in baseball history have etched their names in the record books. It is one of the...
#9 of 157 The Best Detroit Tigers of All Time 33.3k VOTES This is a list of the greatest Detroit Tigers players in team history.The Detroit Tigers are a baseball institution. Formed ...
#1 of 93 The Best Miami Marlins of All Time 8.5k VOTES This is a list of the greatest Miami Marlins ever. Since their inception in 1993, somehow, someway, the Miami Marlins...
#11 of 99 The Best Hispanic Athletes 8k VOTES A list of the best Hispanic athletes. This is a list of the best of the best, the creme de la creme. The people listed here ...
#15 of 41 The Best Current MLB First Basemen 3.9k VOTES Whether you're working on your fantasy baseball roster or simply staying updated with the 2020 MLB rankings, ...
#6 of 27 The Best Athletes Who Wore #24 449 VOTES The best players to wear 24 as their jersey number include talent from all across the sports world. Incredible talents ...
39 Famous Athletes Who Are Alcoholics 1.1M VIEWS This list contains information about athletes who are alcoholics, loosely ranked by fame and popularity. Several famous NFL ...
26 Athletes Who Quit Drinking 195k VIEWS While it seems natural that a an ice-cold beer and a heated game go hand in hand, some of these athletes quit drinking. The ...

Miguel Cabrera is also found on...