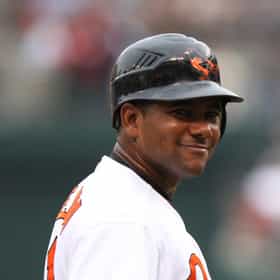 Miguel Odalis Tejada (born Tejeda, May 25, 1974) is a Dominican former professional baseball shortstop who played 16 seasons in Major League Baseball (MLB). He played for six different teams, most notably the Oakland Athletics and Baltimore Orioles, before short stints with the Houston Astros, San Diego Padres, San Francisco Giants, and Kansas City Royals. Tejada spent his first six seasons in MLB with the Athletics, where he began a streak of 1,152 consecutive games that ended with the Orioles on June 22, 2007. He is a six-time All-Star and a two-time Silver Slugger Award winner. In 2002, he won the American League Most Valuable Player (MVP) Award, and was the 2005 All-Star Game MVP. ... more on Wikipedia

Miguel Tejada is ranked on...

Miguel Tejada is also found on...