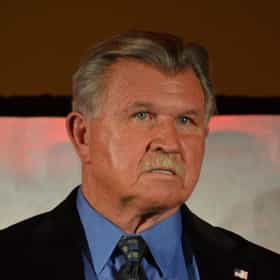 Michael Keller Ditka (born Michael Dyczko; October 18, 1939) is an American former football player, coach, and television commentator. A member of both the College Football (1986) and Pro Football Hall of Fame (1988), he was the 1961 UPI NFL Rookie of Year, a five-time Pro Bowl selection and five-time All-Pro tight end with the Chicago Bears, Philadelphia Eagles, and Dallas Cowboys of the National Football League (NFL). He was an NFL champion with the 1963 Bears, and is a three-time Super Bowl champion, playing on the Cowboys Super Bowl VI team as well as winning as an assistant coach for the Cowboys in Super Bowl XII, and coaching the Bears to victory in Super Bowl XX. He was named to ... more on Wikipedia

Mike Ditka is ranked on...

Mike Ditka is also found on...