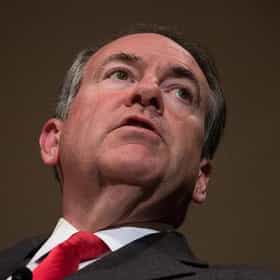 Michael Dale Huckabee (born August 24, 1955) is an American politician and Christian minister who served as the 44th governor of Arkansas from 1996 to 2007. He was a candidate in the United States Republican presidential primaries in both 2008 and 2016. Beginning in 2008, Huckabee hosted the Fox News Channel talk show Huckabee, ending the show in January 2015 in order to explore a potential bid for the presidency. From April 2012 through December 2013, he hosted a daily radio program, The Mike Huckabee Show, on weekday afternoons for Cumulus Media Networks. Huckabee is the author of several best-selling books, an ordained Southern Baptist minister noted for his evangelical views, a ... more on Wikipedia

Mike Huckabee is ranked on...

#750 of 1,042 Celebrity Death Pool 2020 46.2k VOTES They may be beloved performers, award winners, or game changers, but no matter how famous, you can’t escape death. This cele...
#5 of 20 The Most Anti-Gay US Politicians 28.6k VOTES Who are the most anti-gay US politicians? The list is a long one, including politicians from both parties (though a maj...
#2 of 14 Which Republican Candidate Would Lead the US Best in a War? 5.9k VOTES Which 2016 Republican candidates would make good leaders during a war? As commander in chief, the president has the duty to ...
#4 of 14 Which Republican Candidate Would ACTUALLY Lower Taxes? 4.5k VOTES With the release of Donald Trump's tax plan, the economic policies of 2016 candidates and Republican tax cuts are starting t...
#15 of 29 Republicans Who Are the Best at Reaching Across the Aisle 3.6k VOTES Due to the fact that American politics lean so heavily on the two party system, few Republicans reach across the aisle to wo...
#2 of 14 Which GOP Candidates Will Be the Best for White Men? 1.4k VOTES 2016 Republican presidential candidates have to appeal to women and minorities more than ever. But they also need to remembe...
#1 of 14 Family Values: Which GOP Candidates' Families Seem Happy? 1.9k VOTES Family values are among the most important platforms for Republican presidential candidates in 2016 or any election. But equ...
#5 of 18 People who voted for Mike Huckabee... People over 50 are 2x more likely to vote for this The Most Likable 2016 US Presidential Candidates 9.9k VOTES 2016 presidential candidates have to be many things for the American: forceful, compelling, intelligent, and well-spoken. Bu...
#5 of 24 People who voted for Mike Huckabee... also upvote Ronald Reagan on The Best U.S. Presidents in the Past 50 Years The Best 2016 Presidential Candidates 71.5k VOTES A list of the 2016 presidential candidates, as ranked by savvy politicos. The electoral field is wide open and chock full of...
#19 of 19 2016 Campaign Trails You Would Not Want to Be On 3.9k VOTES The 2016 US presidential election season is already underway - that year and a half long grueling process of American politi...
#10 of 12 RINOs in the Wild 841 VOTES Being dubbed a "Republican in Name Only" is every conservative's worst fear. The label of RINO will instantly turn...
#4 of 14 Republican Candidates Who Could Actually Win the General Election 4.9k VOTES Could Trump win the general election? What about Ben Carson? Or Marco Rubio? Which Republican candidate actually has the bes...
#42 of 103 Who Is The Most Famous Mike/Michael In The World? 940 VOTES How many celebrities named Michael can you think of? The famous Mikes and Michaels below have many different professions, in...
33 Celebrities Who Were in Tau Kappa Epsilon 20.7k VIEWS Pledges of the Tau Kappa Epsilon fraternity can expect to find new friends, valuable connections, and volunteer opportunitie...
Famous People You Didn't Know Were Evangelical Christians 20.4k VIEWS Faith is one of the most important aspects of life for evangelical Christians. Maybe it's that focus on tradition and salv...
The Most Successful Obese Americans 648.7k VIEWS The most successful obese Americans include men and women who despite being overweight, have found mainstream success. These...
22 Cringey Times Candidates Lost Control of the Conversation 2.5k VIEWS If the 2016 presidential candidates are good at one thing, it’s being derailed by everything from inanimate objects, to prot...

Mike Huckabee is also found on...