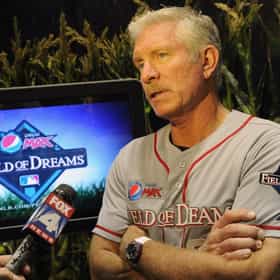 Michael Jack Schmidt (born September 27, 1949) is an American former professional baseball third baseman who played 18 seasons in Major League Baseball (MLB) for the Philadelphia Phillies. Schmidt was a twelve-time All-Star and a three-time winner of the National League (NL) Most Valuable Player award (MVP), and he was known for his combination of power hitting and strong defense. As a hitter, he compiled 548 home runs and 1,595 runs batted in (RBIs), and led the NL in home runs eight times and in RBIs four times. As a fielder, Schmidt won the National League Gold Glove Award for third basemen ten times. Schmidt was elected to the Baseball Hall of Fame in 1995 and is often considered ... more on Wikipedia

Mike Schmidt is ranked on...

#26 of 320 The Best Players in the Baseball Hall of Fame 49.1k VOTES As a baseball player, it's always a dream to be inducted into the Hall of Fame, whether you're a big-time hitter or one of t...
#1 of 120 The Greatest Third Basemen of All Time 35.9k VOTES The greatest third basemen of all time include some veteran MLB players, many of whom are considered among the greatest base...
#4 of 21 20 Videos of Pro Athletes Crying at Press Conferences 152 VOTES Athletes crying at press conferences show a softer, more human side of our favorite professional athletes. All of these prof...
#6 of 13 13 Athletes Who Won MVP After Age 35 165 VOTES Sports are usually a young person's game, but this list of the oldest MVP winners in sports history is proof that you don't ...
#1 of 111 The Best Philadelphia Phillies Of All Time 26.5k VOTES This is a list of the greatest Philadelphia Phillies players in team history, whether top Phillies pitchers or top hitters. ...
#53 of 103 Who Is The Most Famous Mike/Michael In The World? 1.8k VOTES How many celebrities named Michael can you think of? The famous Mikes and Michaels below have many different professions, in...
#8 of 29 The Best Athletes Who Wore #22 477 VOTES The best players to wear number 22 on their jersey include a wide variety of top names from different sports. It has be...

Mike Schmidt is also found on...