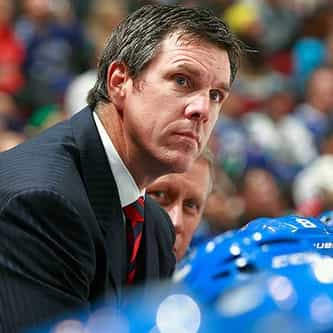 Michael Barry Sullivan (born February 27, 1968) is an American ice hockey coach and former player. He is currently the head coach of the Pittsburgh Penguins of the National Hockey League (NHL). He was a fourth round selection, 69th overall, by the New York Rangers at the 1987 NHL Entry Draft and played 11 NHL seasons with the San Jose Sharks, Calgary Flames, Boston Bruins and Phoenix Coyotes. Internationally, he represented the United States twice, including at the 1997 World Championship. ... more on Wikipedia

Mike Sullivan IS LISTED ON