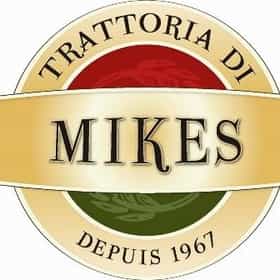 Mikes, referred to as Trattoria di Mikes in the current logo, is a chain of Italian-styled restaurants that originated in Montreal, Quebec, Canada, with 76 restaurants in Eastern Canada, mostly in Quebec. A restaurant was opened in Las Vegas, Nevada, in the United States, in 2004, but was closed by 2008. The restaurant chain is currently owned by Imvescor Restaurant Group, based in Moncton, New Brunswick, who also own Pizza Delight, Baton Rouge and Scores. Mikes was originally founded in 1967, in Montreal, as a sandwich shop. Since then, their menu has added pizza, pasta, chicken, steak, cheese-sticks and many other meals as well as some desserts. By the 2000s, Mikes closed several ... more on Wikipedia

Mikes is ranked on...

Mikes is also found on...