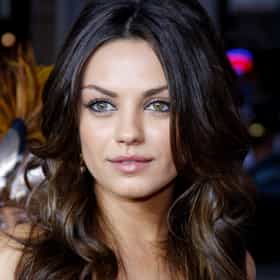 Milena Markovna "Mila" Kunis (; Ukrainian: Мілена Марківна Куніс; born August 14, 1983) is an American actress. In 1991, at the age of seven, she moved from Soviet Ukraine to the United States with her family. After being enrolled in acting classes as an after-school activity, she was soon discovered by an agent. She appeared in several television series and commercials, before acquiring her first significant role at age 14, playing Jackie Burkhart on the television series That '70s Show (1998–2006). Since 1999, she has voiced Meg Griffin on the animated series Family Guy. Kunis' breakout film role came in 2008, playing Rachel in the romantic comedy Forgetting Sarah Marshall. ... more on Wikipedia

16 Times Mila Kunis Was Just As Awesome As You'd Hope 192 votes In case you didn't already love Mila Kunis for her hilarious roles on That '70s Show and Family Guy, it turns out she is jus...
The Very Best Mila Kunis Movies 5.2k votes This is a list of the best Mila Kunis movies, ranked best to worst - with movie trailers when available. Mila Kunis first ca...
Mila Kunis Loves and Hookups 22.9k views Who is Mila Kunis dating? Many famous men have dated Mila Kunis, and this list will give you more details about these lucky ...
Pictures Of Young Mila Kunis 196.7k views This gallery features 30 photos of a very young Mila Kunis, including pictures from her childhood, teenage years, as well ph...

Mila Kunis is ranked on...

Mila Kunis is also found on...