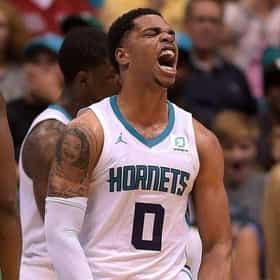 Miles Emmanuel Bridges is an American professional basketball player for the Charlotte Hornets of the National Basketball Association (NBA). He played college basketball for the Michigan State Spartans. A native of Flint, Michigan, he competed for Flint Southwestern Academy (freshman season) at the high school level before moving to Huntington Prep School for his sophomore, junior, and senior year. On June 21, 2018, Bridges was selected with the twelfth overall pick by the Los Angeles Clippers in the 2018 NBA draft. He was subsequently traded to the Charlotte Hornets in exchange for the pick before him, Shai Gilgeous-Alexander. On July 2, 2018, Bridges officially signed with the ... more on Wikipedia

Miles Bridges is ranked on...

#185 of 320 The Top 100+ NBA Players Today 1.4M VOTES This list of the best basketball players in the NBA today ranks all of the league's current standout top players and NBA sta...
#27 of 73 The Best Charlotte Hornets Players of All Time, Ranked 15.2k VOTES While they haven't won a championship yet, the best Charlotte Hornets players are due to get one soon. Known for a short tim...
#8 of 19 Every NBA Player Signed To Rich Paul's Klutch Sports, Ranked 420 VOTES Every NBA player represented by agent Rich Paul's Klutch Sports Group has made a mark on the league. LeBron James and Anthon...
#12 of 36 2018 NBA Draft: Predicting The Number 1 Pick 2.4k VOTES Featuring some of the best college basketball players right now, these are the top prospects for the 2018 NBA Draft. Un...
#16 of 100 The Best NBA Players from Michigan 3.9k VOTES Here are the best NBA players from Michigan. Featuring Hall of Fame greats, superstars, and active players, this list o...
#21 of 47 The Best Current NBA Small Forwards 30.8k VOTES Who are the best small forwards currently in the NBA? Certainly, this list includes some of the greatest small forwards...
#11 of 48 The Greatest Michigan State Basketball Players of All Time 9k VOTES Michigan State basketball fans, we’re ranking the best Michigan State Spartans of all-time. This list of Michigan State bask...
#41 of 52 The Best Current NBA Players Under 25 21.5k VOTES With the average age of an NBA player being 26 years old, the league's youngest players definitely deserve props. While youn...
#17 of 29 The Best Current NBA Left-Handed Players 21.3k VOTES Who are the best left-handed players currently in the NBA? Certainly, this list includes some of the best lefties playing&nb...
#30 of 44 The Best Los Angeles Clippers First-Round Picks In The NBA Draft 385 VOTES Every Los Angeles Clippers first-round pick played a role, however small, for a franchise that has called both Los Angeles a...
#31 of 53 The Best Athletes Who Wore #0 283 VOTES The top athletes who wore 0 as their jersey tried to prove that their performances would be the opposite of their number. It...