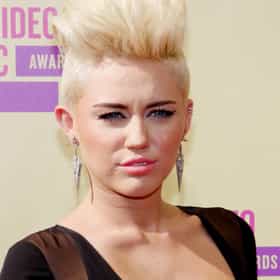 Miley Ray Hemsworth (née Cyrus, born Destiny Hope Cyrus; November 23, 1992) is an American singer, songwriter, and actress. After playing minor roles in the television series Doc and the film Big Fish as a child, she became a teen idol in 2006, starring in the Disney Channel television series Hannah Montana as the character Miley Stewart. Her father, musician Billy Ray Cyrus, also starred in the series, which aired for four seasons until 2011. Cyrus has sold more than 20 million albums and 55 million singles worldwide. She has earned three number-one albums on the US Billboard 200 with Meet Miley Cyrus (2007), Breakout (2008), and Bangerz (2013). Her releases The Time of Our ... more on Wikipedia

Miley Cyrus is ranked on...

Miley Cyrus is also found on...