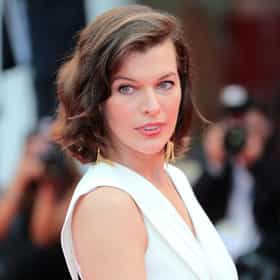 Milica Bogdanovna "Milla" Jovovich ( YOH-və-vitch; born December 17, 1975) is an American actress, model, and musician. Her starring roles in numerous science fiction and action films led the music channel VH1 to deem her the "reigning queen of kick-butt" in 2006. In 2004, Forbes determined that she was the highest-paid model in the world.Born in Kiev, Ukrainian SSR, Soviet Union, Jovovich emigrated with her parents to London when she was five, and then to Sacramento, California; she finally settled in Los Angeles seven months later. In 1987, at the age of 12, she began modeling when Herb Ritts photographed her for the cover of the Italian magazine Lei. Richard ... more on Wikipedia

Milla Jovovich Loves and Hookups 1.8k views Who is Milla Jovovich dating? Many famous men have dated Resident Evil star Milla Jovovich, and this list will give you more...
11 Facts That Prove Milla Jovovich Is Just As Much Of A Rogue As The Characters She Plays 49.3k views Movie stars aren't always as cool as the characters they play, so it's refreshing when your favorite action hero is a real f...
The Best Milla Jovovich Movies 2.9k votes List of the best Milla Jovovich movies, ranked best to worst with movie trailers when available. Milla Jovovich's highest gr...

Milla Jovovich is ranked on...

Milla Jovovich is also found on...