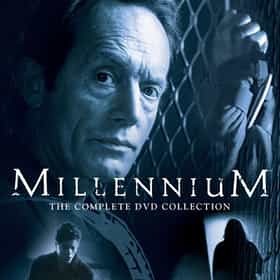 Millennium is an American television series created by Chris Carter, creator of The X-Files, that aired on the Fox Network between 1996 and 1999. The series follows the investigations of ex-FBI agent Frank Black now a consultant, with the ability to see inside the minds of suspects, working for a mysterious organization known as the Millennium Group. There was also a crossover episode of The X-Files titled "Millennium" that featured the Millennium Group and Frank Black. The series was filmed in Vancouver, British Columbia, though most episodes were ostensibly set in or around Seattle, Washington. ... more on Wikipedia

Millennium is ranked on...

Millennium is also found on...